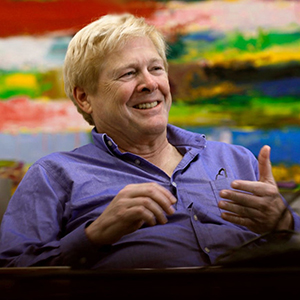 Lidar companies Ouster Inc  and Velodyne Lidar Inc have agreed an all-share merger that steps up consolidation in search of profitability in autonomous vehicle technology.

Velodyne and Ouster compete in precision sensors that enable self-driving vehicles to see the world around them. Both companies have been hit hard as timetables for large-scale autonomous vehicle deployment have stretched out.

The following includes excerpts from the interview by Cromwell Schubarth entitled Here’s why the founder of lidar pioneer Velodyne’s agrees with Elon Musk that that the technology is a bad bet.

David Hall has already washed his hands of Velodyne Lidar Inc., the lidar sensor maker he founded. Now he thinks investors would be wise to be cautious about the lidar industry.

Lidar sensors are radar-like object and proximity detection devices that rely on lasers rather than radio waves. To date, they’ve been a key component of most self-driving car projects.

But they aren’t necessary to such efforts, Hall told the Business Journal in an exclusive interview Monday. In the long run, autonomous vehicles will likely use a system of cameras and artificial intelligence instead of lidar sensors, he said.

“The combination of cheap cameras and AI is a slam-dunk winner for the kinds of things that we bragged about using lidar to do,” Hall said.

That’s the same position Elon Musk has pushed at Tesla Inc. Musk, the electric vehicle maker’s CEO, has insisted that its advanced driver assistance technology and autonomous vehicle efforts rely on cameras, rather than more expensive lidar sensors or even radar.

Hall, 71, is pretty much the definition of an expert on lidar technology and the market. He first developed a lidar sensor in 2005 to compete in the Defense Advanced Research Projects Agency’s self-driving car challenges that helped jump start the autonomous vehicle industry. Within two years, his sensors were being used by numerous competitors in the DARPA challenges.

Around the same time, he started Velodyne to be his lidar business, and soon after, Google LLC’s self-driving car effort — now known has Waymo LLC — incorporated his company’s sensors into its vehicles.

His loss of faith in the technology was more recent. He attended a seminar about incorporating computer vision systems into robots and other products. While some 100 companies were there, none of them were lidar makers, he said. Those companies demonstrated pretty clearly that robotic systems — including cars — don’t need lidar to navigate the real world, he said.

“If you want to make a robot, you can use a camera. If you don’t like that, use two cameras. And if that’s just not good enough, use three cameras,” he said. “…Throw enough cameras at it and, eventually, you’ll solve the problem.”

If Hall’s right about cameras and AI displacing lidar, it could have profound implications for his former company and its rivals in the lidar sensor space. Ten lidar makers — including San Jose-based Velodyne and seven others with Bay Area ties — went public in the last two years on the promise of rich rewards amid an expected booming market in autonomous vehicles.

With the autonomous vehicle market and technology developing more sluggishly than many enthusiasts expected, the lidar market has likewise been slow to take off. All of the local lidar companies are losing money and burning cash and have seen their stock prices plunge since they went public. But their investors and executives are still betting on the future market for their sensors, in autonomous vehicles or elsewhere.

Marta Hall, wife of David Hall, former President of Velodyne, and Founder of the World Safety Summit for Autonomous Vehicles, takes a slightly different stance. She believes there is still a market for lidar if it is used in combination, fused with cameras.  Marta has promoted the use of lidar for more than autonomous vehicles including ADAS for street safety and smart cities.

The Halls liquidated their Velodyne shares

Hall, though, is betting the lidar market will never rebound. This spring, about a year after Velodyne removed him as Chairman of the Board, he sold off most of his remaining shares in the company, decreasing his stake in it from 43% to 10%. This summer, he and his wife, who had served as Velodyne’s President until 2021, sold off their remaining Velodyne stock (Nasdaq: VLDR).

Hall began selling shares because he didn’t like the direction of the company, he told the Business Journal. From almost the time he was pushed out until this spring, he fought a war with Velodyne in the press, at shareholder meetings in an effort to “right the ship.” He eventually decided the company was too problematic and couldn’t be salvaged.

Along with David, Marta Hall also sold off her shares. She served on the Board of Directors for a year after her husband departed trying to save the company. She stepped down from the board in February, 2022 because she assessed that the new team, including the CEO and board members, lacked the technology, industry experience, and creativity to run the company. “I believe lidar has a place in automotive safety. VLDR lost their contracts with OEMs due to incompetence. Some lidar company is going to pick up the opportunity because lidar is an essential sensor for automotive safety.”

Even the merger Velodyne announced Monday with Ouster Inc. (NYSE: OUST), its San Francisco-based rival, won’t save it, David Hall said. The merger of two “zombie” companies just yields another zombie, he said.

Velodyne has “a product that is obsolete and a big cash burn problem,” Hall told the Business Journal. He continued: “I tried to warn everybody with my press releases, so I don’t feel bad about somebody buying the stock I sold for $2.40 now that it’s 80 cents or 90 cents. But I felt a little guilty about unloading the stock because I knew the company had no hope of moving forward.”

Ouster and Velodyne declined to respond to Hall’s comments.

Instead of lidar, Hall, a repeat inventor and entrepreneur, has turned his attention to rocket science. Taking a page from science fiction writer Arthur C. Clarke, who proposed the technology in the 1950s, and a company called StarTram Inc., which secured some patents for it early in the new millennium, he’s developing a kind of electromagnetic gun that could be used to launch spacecraft or other items into space.

Under the auspices of a new company he founded called Shoot The Moon Rocket Co., he’s already designed much of the system and even spoken with NASA about it. Although the space agency expressed interest, he’s not yet ready to demonstrate his technology. He expects to be ready in the middle of next year at which point he plans to do some tests in Truth or Consequences, New Mexico, an area that’s become a hotbed of space industry activity.

“I have enough where I could fire something probably by the end of this year, but it wouldn’t impress anybody as much as it needs to,” Hall said. “But,” he continued, “I keep thinking, ‘God, wouldn’t it be great if this is bigger, longer, faster, blah blah blah.”

For now, Hall is self-funding his efforts. He’s doing all the design work at the workshop at Stone Boat Yard in Alameda where he’s done much of his past inventing.

A natural tinkerer, Hall enjoys working on new ideas and plans to continue to do so for at least the next decade. For now, though, he’s focused on his moonshot.

“Something spectacular is going to happen. I guarantee it,” Hall said.