It may seem that our memories will only ever recall a bull market. The current bull market is the longest in history. It started in March 2009, and has been pushed forward by years of record-low interest rates and numerous monetary policies, which have been adopted by central banks around the world, making it cheap to borrow money. However all good things eventually come to an end.

The S&P 500 hit an all-time high (3.385) on February 19, 2020 then fell 34% at the beginning of the COVID-19 pandemic in March 2020. This led to a worry that the next bear market had begun, but after recovering so quickly, it was named the shortest bear in history. We have completely recovered and then some, surpassing that February [of 2020] high and even reaching over 4,700 in early November 2021, a near 39% increase over pre-COVID numbers. More recently, the fear of inflation has taken hold, and renewed fears of this bull market coming to an end have renewed. So, what would happen if a tidal wave hit the markets resulting in “one bad day,” and what can be done to protect yourself from such a disaster?

At 12 years, the longest bull market ever, many have nearly forgotten how a bear market can be both financially disasterous and soul-crushing. The typical definition of a bear market is a market falling 20% or more, over two months or longer, often combined with widespread economic pessimism, and even recession. The average bear market lasts 289 days (9.5 months); however, some have lasted for years.

The Great Depression lasted over five years, from March 1937 to April 1942, with the market losing 54% of its value, but had been preceded by the stock market crash of 1929 as well as seven other crashes in the eight years that followed, each with 29% to 61% declines. This downward trending cycle only stopped with the start of the second world war. After our long bull market, it is not impossible to imagine a prolonged bear market beginning on our one bad day, potentially lasting years.

October 19th, 1987 gained the frightening moniker of Black Monday because the markets saw their worst single-day decline of 22.61%. Eight USD-denominated markets saw declines of 20 to 29%, while Hong Kong, Australia, and Singapore all fell more than 40%. Worldwide losses were estimated at $1.7 trillion in 1987 dollars, which is 4.1 trillion dollars today. There were ten times the average number of margin calls on that day, and panic set in. 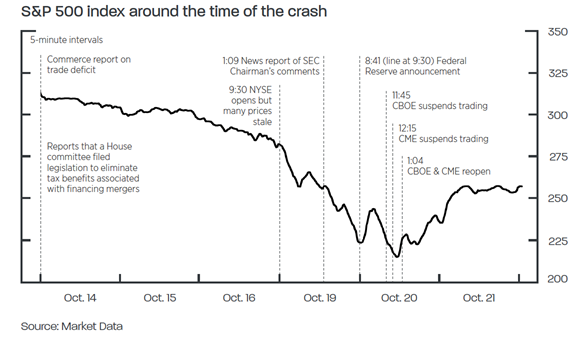 Imagine the S&P 500 falling from its current 4,700 points to 2,547 points in a single day, fortunes fell by a quarter in a day for almost all investors, and nearly halved for those in other markets (Hong Kong the worst hit); all on Black Monday. Though there are some stop measures in place now, they can just slow the fall, but not prevent it.

When we think of bear markets, we only think stocks; however, bears will often have broader impacts than just with equities.

After the 1929 crash, the housing market tanked, losting over 66% of its value, with bank lending decreasing, as well. In nominal terms, the typical property purchased in 1920 retained only 56% of its initial value two decades later.

At the height of the Great Depression,

For just one bad day, these kinds of numbers are not unimaginable. There has not been a wave of bank closures, but there is a lot of regional bank consolidation. During the COVID pandemic, the unemployment rate was over 14%, and that actual number may have actually reached 20%. The housing market has gone gangbusters with low rates, but the bubble may burst.

HOW TO PREVENT THE WORST?

Sadly because of one bad day, all of the abovementioned are not just in the realm of possibilities. All have been seen before, and though some regulations have been tightened to protect the investor, those same rules have been loosened, and the financial industry has figured ways around rules putting many of their investors at risk. So what is the savvy investor to do? Fixed annuities provide principal protection, meaning you can’t lose your money if stocks, banks, or even real estate tank. An annuity holder either earns interest OR nothing, but never loses. A fixed index annuity (FIA) gives the holder tax-free growth, made explicitly for bear markets. Many provide income with premium protection from market volatility, which means there is upside potential, but no downside risk for the premium. In a bear market, you’ll gain stability with an FIA, and have the upside opportunity when the market eventually turns. FIAs can be a planning vehicle for your retirement savings, and are most valuable when there are the largest market downturns. They combine tax deferral with options for liquidity and annuity payouts. Annuities provide their holders with flexibility, allowing the buyer to start receiving payments in as little as one year, or deferring the payments until a pre-determined point in the future. Since annuities are a type of insurance, the full accumulation value is available at death of the policyholder, providing a way for heirs to avoid probate. Finally, with annuities, you can have a fixed account option that means you are guaranteed a certain amount to be paid every month no matter what happens with the markets.

Stocks, mutual funds, ETFs, and other investment vehicles can decline with market volatility. FIAs are linked to various indexes like the S&P 500, but don’t participate in the index’s downside risk. The following shows the risk profile that many investments provide. You can see that annuities and FIAs can offer some of the best returns with minimal downside risk. 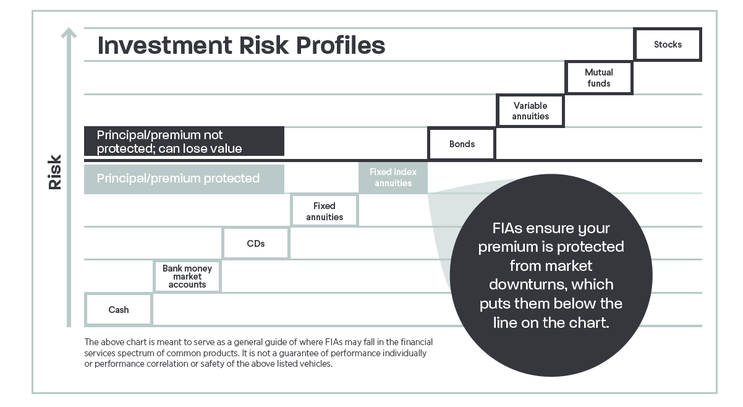 Annuities are meant for someone trying to create a conservative growth foundation, while also working toward a swift financial strategy. This strategy can help guarantee you a lifelong stream of income.

While one bad day can be a disaster for many, it does not have to be for you. There will eventually be an end to our record-breaking bull market and, with it, the potential to wipe out much of the gains that investors have seen for over a decade.

Dealing with this threat is especially vital for those that are nearing retirement. Work with your financial advisor on options in the annuity space that can allow you to continue to gain from the market, while preventing catastrophic losses when the inevitable one bad day comes.

If you would like to learn more about how we can help you with your financial and retirement planning contact us today.

“With contributions from Marc S. Rogers founder of Producers Prospect”