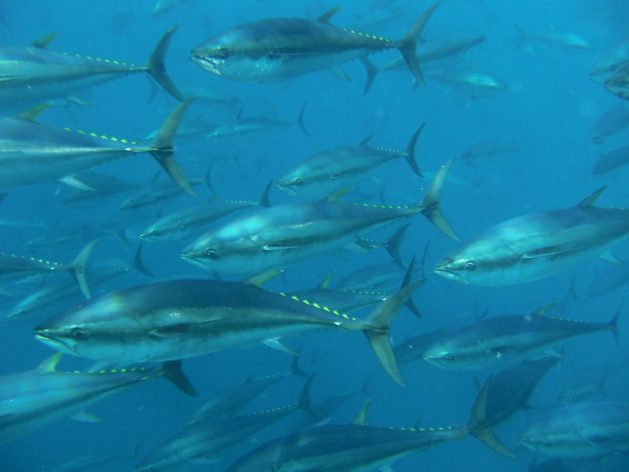 Nairobi, Dec 6 2022 (IPS) – The Atlantic bluefin tuna is among the largest, fastest, and most beautifully colored of all the world’s fish species. They can measure more than 10 feet in length, weigh over 700 kilograms, and can live longer than 30 years. With their metallic blue coloring on top and shimmering silver-white on the bottom, the giant bony fish is a sight to behold.

But humanity’s interactions with the Atlantic Bluefin tuna have not always been sustainable. Highly migratory and warm-blooded, every year, they swim to the tropical waters of the Gulf of Mexico and the Mediterranean Sea to reproduce, making them more accessible to fishermen.

The IPBES Assessment Report on the Sustainable Use of Wild Species, released in July 2022, offers important perspectives on the global biodiversity crisis and approaches to the use of wild species that can support the protection and restoration of such species.

Approved by representatives of the 139 member States of IPBES in Bonn, Germany, the report makes reference to a number of endangered wild species, highlighting challenges that undermine their sustainable use, providing best practices and a feasible path forward based on the most updated scientific knowledge.

With regards to the Atlantic bluefin tuna, the IPBES report stresses that the species has been sustainably exploited for two millennia by various traditional fisheries. As with many other fish stocks worldwide, the development of modern and more industrial fisheries occurred after the Second World War in both the North Atlantic and the Mediterranean Sea and rapidly overtook the traditional fisheries.

The report further shows how the rise of the sashimi market in the 1980s brought attention to a strong demand for fresh Atlantic bluefin tuna from Japan. During this time, there was already overfishing of the southern bluefin tuna stock, which was, until then, the main source of fish tuna for the Japanese market.

When the species became a highly sought-after delicacy for sushi and sashimi in Asia, the value of Atlantic bluefin tuna increased, and the species was characterized in the media as being worth its own weight in gold, as shown by the annual New Year’s auction at the Tsukiji Fish Market, where a single bluefin tuna could be sold for up to $3 million.”

Driven by these high prices, fishermen deployed even more refined techniques to catch the delicious giant and to do so in even larger numbers due to the use of advanced longline vessels.

Conservationists were alarmed, not least because the large bony fish has a voracious appetite and is a top predator in the marine food chain, which is critical in maintaining a balance in the ocean environment.

The overcapacity of fishing vessels, combined with illegal fishing practices, brought the population of the Atlantic giant to dangerously low levels.

Factors such as the high value of the Atlantic bluefin tuna, coupled with insufficient enforcement of existing rules and regulations, and pursuit of short-term profits and economic growth, took precedence over conservation, creating troubled waters for this iconic species.

The IPBES report found that the severe and uncontrolled “overcapacity also due to deficient governance at both international and national levels generated a critical overexploitation of the resource and a severe problem of illegal catch. ”

The growing value of Atlantic bluefin tuna has led to a sharp increase in the fishing efficiency and capacity of various fleets, as well as the entrance of new storage technologies and farming practices.

“The management failure of Atlantic bluefin tuna at that time was partly due to the multilateral nature of the International Commission for the Conservation of Atlantic Tunas, which is the regional fisheries organization that has in charge to monitor and manage tuna and tuna-like species of the Atlantic Ocean, and to a decision-making process based on consensus.”

However, the IPBES report finds that “the scientific advice had, at that time, little weight against fisheries lobbies, which were most influential at maintaining high catch levels. In particular, questioning the Atlantic bluefin tuna scientific advice through the issue of uncertainty has been commonly used by different lobbies that wished to push their own agendas.”

During the 2000s, environmental NGOs managed to call the attention of the public to the poor stock status of Atlantic bluefin tuna. Consequently, managers began to pay more attention to scientific advice and implemented a first rebuilding plan in 2007, which was reinforced in the following years.

The final Atlantic bluefin tuna rebuilding plan was ambitious, as it included the reduction of the fishing season for the main fleets, an increase in the minimum catch size, new tools to monitor and control fishing activities, and a reduction of fishing capacity and of the annual quota.

Strictly enforced, these measures proved to be successful: They rapidly led to the rebuilding of the population. The latest analyses clearly show that today Atlantic bluefin tuna is not overfished anymore; the stock size is, in fact, increasing.

The IPBES report concludes that the Atlantic bluefin tuna case clearly shows that effective management of international fisheries that exploit highly valuable species that have been overexploited for decades is possible when there is strong political will.

It also shows that “uncertainty that is inherent to any scientific advice is also a source of misunderstanding, sometimes manipulation, between scientists and managers for whom uncertainty is often taken to mean poor advice.”

“Furthermore, these uncertainties can be weaponized by powerful political lobbies, whether intentionally or not, to advance a particular cause. Like in all scientific fields, fisheries scientists cannot provide certainties, but only probabilities and sometimes a consensual interpretation.”

Against this backdrop, more science is needed to deliver less uncertainty and better management recommendations, as this is a prerequisite to long-term sustainable use of species of plants and animals.