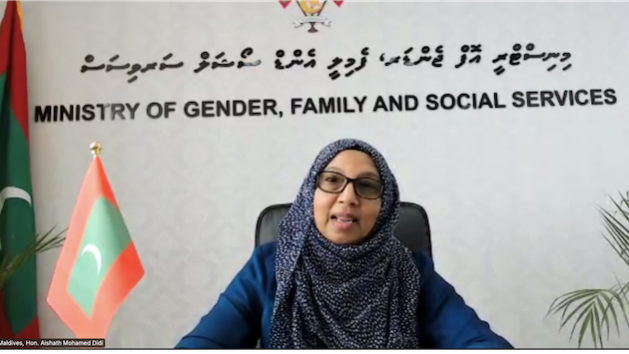 Two National Transfer Account (NTA) experts told the session that with good planning and policy, it was possible to change the trajectory so that those in retirement were not only reliant on the state.

NTAs provide a coherent accounting framework of economic flows from one age group or generation to another.

Professor Sang-Hyop Lee of the East-West Center and the University of Hawaii, succinctly in an “elevator pitch,” explained his interests in population. These included “looking at how a changing population structure affects society and economy, current and future,” and “what public policies could be pursued to influence the outcome.”

Lee said that using NTA tools with disaggregated data, including consumption (both private and public sector) and other variables like income and savings, could assist with policy development.

By 2080, he said, the whole Asia Pacific region would have an aging population – and public policy could change the outcomes by including evidence and knowledge-based policy to influence labor patterns of the female, youth, and elderly labor force; increasing productivity through effective education, health investments, training and finally to improve the work-to-retirement transition.

Eduardo Klein, Regional Representative of HelpAge International, who chaired the session, commented that the key takeaway was that the NTAs were a crucial tool for developing strategies to adapt to population aging.

In her keynote address, Maldives Minister for Gender, Family, and Social Services, Aishath Mohamed Didi, said that her country, which was a small island state the country, faced “unique development challenges and is vulnerable to economic shocks and climate change.”

“The Maldives entered the window of opportunity in 2010 when the majority of the population was working, and it’s estimated that the democratic transition will be completed by 2030,” Didi said. “Due to a rapid fertility decline and increased life expectancy, it’s estimated it will become an aging population by 2030.”

She outlined various policy changes in the Maldives, including addressing the investment in children, which was lower than in other economies with similar fertility or development levels. The country had included free basic education from ages four to 16 and also spent US$ 30 million supporting 15,000 students to achieve their first degrees. This has been expanded to include zero-interest rate loans. In the past two to three years, the Maldives had spent over US$ 64 million to support about 2000 students studying abroad in 31 countries. Other efforts to improve education included investing in technical and vocational education and providing skill development opportunities for youth, including apprenticeship programmes, particularly in the outer regions away from the capital or the central areas.

Didi said the Maldives depended highly on tourism, but foreign workers (primarily men) comprised 60% of the workforce. Women only play a small role in the industry and hold the most informal sector jobs.

“Young people are required to become skilled and equipped to compete with foreign workers in the domestic economy,” Didi said, adding that the demographic dividend transition was expected to create both opportunities and challenges. “The aggregate public spending on healthcare and other social protection needs to grow by more than 2 percent per year until 2050 to maintain the same level of service enjoyed by the population in 2022 – even with per capita benefits, the government’s budget needs to grow substantially.”

Klein noted that Didi’s overview showed how the Maldives was in the demographic dividend and was investing in the future and that investment had a “return in improved health and a better educated, more productive, more engaged, and a healthier population living in a harmonious society.”

Rikiya Matsukura, Associate Professor at Nihon University, noted that opportunities arose with planning and strategic policymaking. While an aging population was “inevitable” and “wasn’t curable,” policymakers played a crucial role in changing the trajectory.

While people aged 55 to 70 may not be working, if they are healthy, they could work, Matsukura said, that this could create an additional workforce.

“In the case of Japan, the income generated by additional elderly workers could correspond to 3.2 to 6 percent of Japan’s real GDP,” he noted.

This elderly workforce could be assisted by technology – artificial intelligence (AI) and robotics and the economy could grow by 35% if technology could make housework easier.

Lee noted that there was no easy answer but what was required was short and long-term planning which took into account crises. This aging population issue will not go away.

Klein too, noted said future planning was complex. For example, India (among other countries) had invested in education, but because of the COVID-19 pandemic, children could not attend school for two years, which would have consequences for the future workforce. Climate change, in addition to aging, would need to be planned for in Bangladesh.

During the discussion, parliamentarians were concerned about the impact of the COVID-19 pandemic. Dr Jetn Sirathranont, an MP from Thailand, noted that policymakers needed to use the NTA tools, but post-pandemic, every country, including Thailand, was experiencing a situation where there was “less income and less revenue but high expenses.”

Sirathranont asked how one could apply NTA tools in these circumstances.

While Klein quipped that this was a million-dollar question, Lee said what was required was short and long-term planning which took into account crises like the pandemic. However, he noted, “this aging population issue will not go away.”