Taren Chilia lost his school; his mother lost her job to Cyclone Pam – both are survivors of increasingly intense climate-change-induced weather patterns. At COP27, the Pacific Community voiced its conviction that a loss and damage fund is required to compensate for climate impacts. 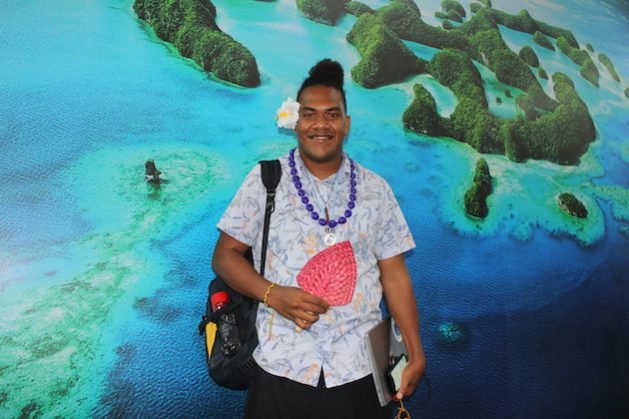 SHARM EL SHEIK, Nov 14 2022 (IPS) – The only thing Taren Chilia remembers about Cyclone Pam was that it flattened his school in Vanuatu, washing away books, equipment, and – well, almost his dreams too.

Cyclone Pam – a category 5 cyclone, was one of the worst to hit the South Pacific Ocean island in 2015, displacing about 45 percent of its 270 000 people. It also left several people dead and destroyed property, houses, and crops. Scientists say human-induced climate change is warming ocean temperatures, fuelling tropical storms driven by warm, moist air.

In Vanuatu, the cyclone tore through the Efate Island in Shefa Province, close to Port Vila’s capital.

Chilia, now 20, from Mele village, recalls fleeing rising water as the storm swept through his village.

“I was at home with mum and dad, and the school was closed, and everyone was in the house. We could not go outside, but we could hear the wind howling and the thunder strike when my neighbour came to fetch us to leave our house, which was not safe from the storm,” Chilia, who was then in his primary school, narrated to IPS on sidelines of the COP27 summit.

On the agenda of the global meeting of the Conference of Parties to the UN Framework Convention on Climate Change (UNFCCC) is the issue of loss and damage and how developing countries can be compensated for the losses as a result of the severe impacts of climate change.

“As we rushed out of our house, I heard a loud roaring wave, and our village was flooded. The school was washed away, just like everything else around,” said Chilia, who was chosen to lay the first brick to rebuild the first block of classrooms in his village after the devastating Cyclone Pam.

With donations by well-wishers in Australia after Cyclone Pam hit, villagers were challenged to rebuild Chilia’s school within three days, and they did.

“We used big white tents donated by UNICEF as classrooms until we built the school. The whole village pitched in to build on day one (which was) on a Friday. On the second day, we painted the school, and on the third day, we celebrated as we opened the school. On Monday, we were back to school,” he said.

Chilia believes that Pacific Islands like Vanuatu need to be compensated to repair and restore infrastructure lost to the impacts of climate change. He says developed countries responsible for high carbon emissions that have led to global warming should take responsibility for their action and pay up.

“I am calling on all countries of the world to step up on climate justice for the Pacific Islands by supporting (the creation of) a loss and damage facility at this COP27,” Chilia told IPS. He explained that the Vanuatu government should seek an advisory opinion from the International Court of Justice in settling the issue of payments for loss and damage caused by climate change.

Developing countries arguing that they have suffered the impacts of climate change to which they have not contributed are pushing for a loss and damage fund to compensate them for climate impacts.

“We are also looking into the future and how those impacts will get much worse unless mitigation is ramped up and unless technical assistance, finance, for instance, are also ramped up,” said Ronneberg, who explained that available resources were not fit-for-purpose in addressing the current impacts of climate change in pacific island countries.

“The type of loss and damage that we are seeing now and that we are anticipating given the different scenarios is not really going to address those impacts. We know there is humanitarian assistance available, there is the Green Fund and the Adaptation Fund, but these do not meet the needs we are seeing,” he said.

“The loss and damage facility is a key to the Pacific Islands, but there are a lot of unknowns at the moment. We know what we do not want. This has to be worked out in common with our development partners, and everyone has to be on the same page regarding loss and damage issues. We are not quite there yet.”

For Chilia, the impact of climate change is real.

“Climate change has hit me personally and has impacted human rights,” Chilia said. “My mother used to be a tourism sales lady, but she is back home because the cyclone destroyed her stall.”

“I am the breadwinner of the house with seven of us in the family, and I work the one job at the restaurant and bar just to feed the family.”

Chilia could not complete his secondary school after he was forced to drop out when his mother lost her tourism business. His father is unable to work after developing a painful back. He used to take on seasonal jobs picking apples in Australia and New Zealand.

He said coming to COP27 was his first opportunity to travel, but the experience left him enriched. He had learnt so much about climate change and could not wait to tell his village about restoring lost coral reefs.

“I love snorkelling, and when I go snorkelling, I do not see any coloured reefs anymore, but we can do a lot to restore our coral reefs that we are losing because of climate change.”

The Island of Vanuatu relies on coral ecosystems for their economic, livelihood, and coastal protection benefits. A rise in ocean temperatures has led to coral bleaching, while acidification has reduced the availability of calcium minerals in the water that corals need to grow and repair themselves.

“I have a dream – even though my dream has been broken because I did not get to finish my year 10 at school and had to get a job to help my family,” said Chilia. “But I want to bring (the world’s) attention to climate change,” said Chilia, who believes that his activism as a member of Greenpeace Australia Pacific will help make a difference.

TagsContent Marketing English Financial Content iCN Internal Distribution PR-Wirein Reportedtimes
Sales of Silica Slurry across the World Is Anticipated To Reach US$ 475.6 Million By 2032-End
Global Amniotic Membrane Market Is Expected To Expand At A CAGR of 14% by 2032 | Fact.MR Forecasts