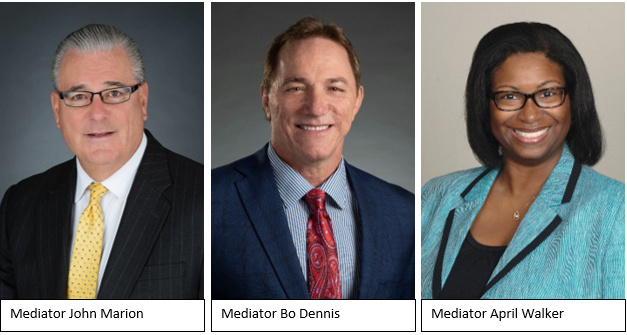 “Congratulations to the newest members of NADN and CADN (Canadian Academy of Distinguished Neutrals), inducted for 2023,” Mr. Lee recently posted on LinkedIn. “One hundred and fifty neutrals across 42 states and four Canadian provinces have made the cut, following an extensive market survey of thousands of litigation firms, completed over the summer.”

Mr. Marion, Mr. Dennis and Ms. Walker are among this year’s 27 inductees into the academy’s Florida chapter, also known as The Florida Circuit-Civil Mediator Society. NADN was established in 2008 following a conference of the committees of six statewide associations, including Florida’s. The membership of those original associations constituted the academy’s charter membership.