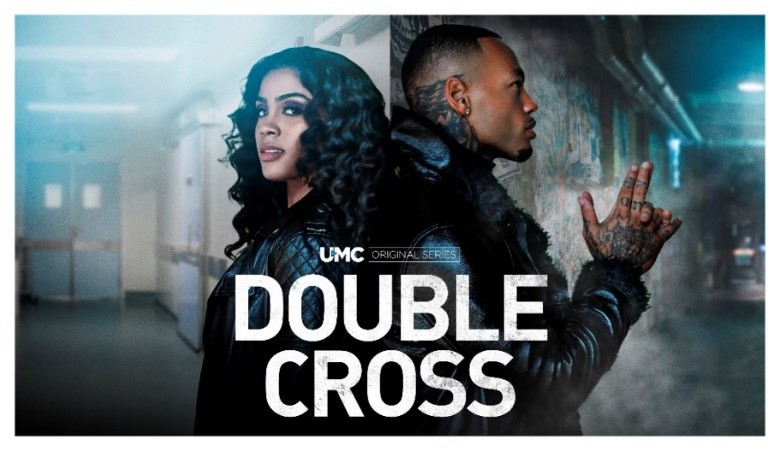 Hollywood, CA – Television media mogul, Robert L. Johnson, (Chairman of RLJ Entertainment and founder of Black Entertainment Television (BET), initiates another era in entertainment with the launch of UMC (The Urban Movie Channel). UMC is the first and largest streaming service for Black TV and film under the AMC (American Movie Channel) Networks. The network is at the forefront of the streaming industry with its premiere of the original series, “Double Cross.” The new series, created by Christel Gibson, Show Runner/Writer, and brother Howard Gibson, Executive Producer/Director, is a cross between, “Dexter” meets “The Wire”. This provocative drama follows the stories and lives of two vastly different fraternal twins, who team up to become vigilantes. Rising actress, Ashley A. Williams (His, Hers and the Truth) and popular fitness guru, Jeff Logan, star as “Wonder Twins” Erica and Eric Cross. UMC premieres the first episode of “Double Cross” Thursday, May 21, 2020, and will air every Thursday thereafter. To check for air times go to Facebook.com/UrbanMovieChannel and on Twitter/Instagram @WatchUMC.

The Cross siblings are on a quest to save their neighborhood from a relentless trafficking ring that has taken over Doctor Erica Cross’s hospital emergency room and have shaken up the streets that Eric runs. Adding to the suspense and intrigue of the drama is NAACP Image Award-winning actor, Darrin Dewitt Henson (“Soul Food”), as Detective Ryan and Women in Film and Television Award-winner, actress, Jasmine Burke (“Saints & Sinners”), as Detective Candice, along with multi-talented actor, Tremayne Norris from (“House of Cards”) who plays the role of Doctor Cintron, in the series.  “It’s such an exciting time for new content on UMC.”, says Nikki Love, VP of Development for the streaming network. “As we continue to build out our diverse programming lineup, we’re excited to present a new action-packed thriller that we know will have viewers holding on to the edge of their seats. Christel and Howard have delivered a wonderfully gritty yet gripping new project that introduces a new genre not yet seen on UMC. We’re very much looking forward to welcoming audiences into the captivating world of Erica & Eric Cross.”

She’s a caring and prominent emergency physician at Mercy Hospital. He’s a notorious street soldier who runs ‘The Heights’. The two fraternal twins couldn’t be more opposite, but they have a bond that not even murder can break. Erica & Eric Cross are the “Wonder Twins” that decide to take matters into their own hands after a sudden rise of violent incidents occurs, within their community. Haunted by their past, the twins set down a path of their unique brand of vigilante justice. As homicide detectives close in on their investigations and they face imminent threats of being exposed as murderers; the Crosses escalate their efforts in finding the leader of the ruthless trafficking ring. Their pursuit of justice takes them down a trail of vengeance, blackmail, love, and murder that they can’t turn back from…