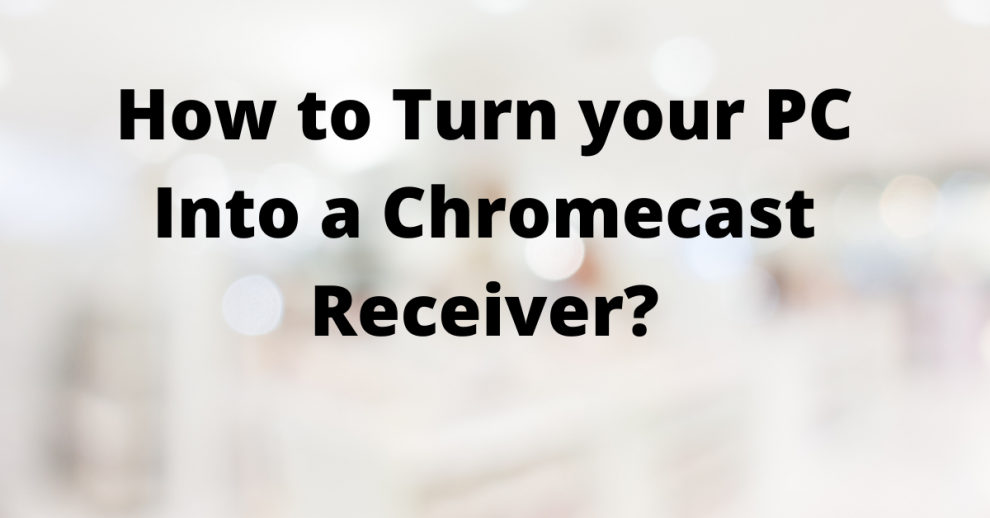 PC as a Chromecast receiver was available not as a feature, but as a bug or loophole that was being exploited with the 1st-generation of Chromecast dongles. As such, Google eventually moved to shut it off, and worked on the bug and removed the incredibly popular feature. However, seeing as the ‘turn computer into Chromecast’ crowd was too big to ignore, Google sought an official method to turn PC into Chromecast receiver. So, you could say that the PC as Chromecast receiver concept lived on, but in a different way.

Ever since the bug was resolved and rectified, Google has gone on to release such a feature for the Chromecast, but only for educational purposes, which can only be accessed with a Google Education account, meant for the Google Cast for Education extension. If you know anything about Chromecast, you know that they are supposed to stream your PC’s content onto another screen and not the other way around i.e., the computer starts to receive what the Chromecast streams.

But while this may not be possible according to you, the Chromecast is designed in such a way that it can be used to make the computer receive the stream from it. How? Well, this is what today’s passage is all about. How to turn your PC into a Chromecast receiver? So, in order to turn your PC into a Chromecast receiver, you will need a Google Apps for Education account to run it, and some testing has shown that it will even work with a Google GSuite account or a business account, as long as nothing fun is in there. Well, that’s very un-Google-like, isn’t it?

How to Turn a PC Into Chromecast Receiver?

However, this all got too much and Google fixed and patched the bug up, leaving many people desperate for a fix. And the fix Google did provide, albeit with a twist: turning your PC into a Chromecast receiver was now only allowed for educational purposes, and you would have to have a GSuite account, a business or education account registered with Google to utilise this feature.

Let’s get to know the various stages with which you can turn a PC into a Chromecast receiver,

Read Also: How to Install kodi on Chromecast

With the first-gen Chromecast, you had the option of downloading a simple file for your PC, that would exploit the firmware bug and cause it to stream content to your PC, turning the PC into a Chromecast receiver. This bug was exploited far too many times, and under Google’s nose, people were routinely turning their PCs into Chromecast receivers. Naturally, it caused a stir within the PC community and caused Google to patch the bug and return the dongle to what it was originally intended for.

How to Turn PC Into Chromecast Receiver Now?

Google, after much clamouring from the community that used and loved the Chromecast, decided to bring back this feature, which had previously allowed users to stream content to a PC, essentially turning it into a receiver. But this time, the project was resurrected for the good, not for Netflix. Google allowed educational content to be streamed over it, and restricted access to such a reverse feature to users of Google Cast for Education extension, which runs on a Google account registered with Google Apps for Education account.

Start by downloading the Google Apps for Education application, and sign in using your Google account or make one on the go. This will allow it to be registered as an educational account. Then, download and install the ‘Google Cast for Education’ extension on your Chrome browser, which should not take more than a couple of minutes. Once you’ve done that, the browser will itself prompt you to connect to a Chromecast device, which you can see in the list named (liked Matt’s PC). Click on it and the connection will be established.

Now, since you’re on the Google Apps for Education platform, it will allow you to reverse the functionality of the Chromecast and the PC as a receiver. Just click on ‘Stream to’ and a list will pop up with devices available within the connected network. Select your PC, and the Chromecast will then start streaming onto your PC. But remember, this is intended only for educational purposes, so if you stream something else, Google can take notice of it.

Also, a disclaimer. While we did claim that this feature only works with a Google Apps for Education account, several other users and tried and found success with a GSuite account, or a Google business account (a regular one). Again, since this is a feature most likely in beta version and with limited functionality, you may or may not have success with the latter accounts. The Google Apps for Education account seems to be working fine in all situations, so you can use that to turn PC into a Chromecast receiver.

How to Install kodi on Chromecast
Best Speakers For Chromecast Audio: Anumerated
Comment