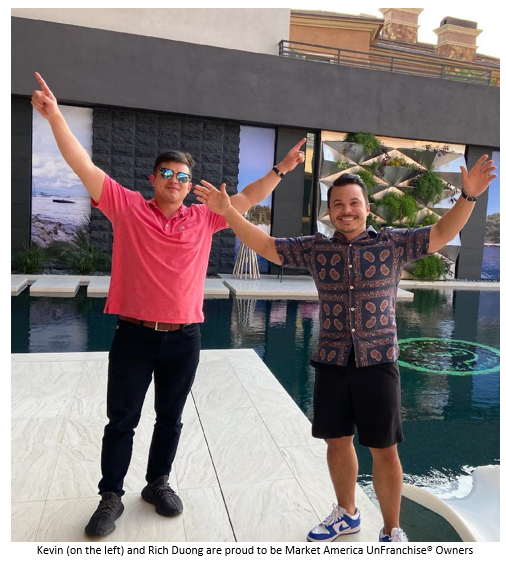 27-year-old Tuan Duong left Vietnam on April 30, 1975, and came to America, following the fall of Saigon. As it happened, Tuan had a friend working with the U.S. Embassy and was able to flee Vietnam with their help. Tuan believed there was a better life waiting for him in America. Not long after arriving in the States, Tuan found work designing helicopters for the military, fell in love, married and together with his wife, Mary raised five children — one daughter and four sons (including Kevin and Rich). All that Tuan believed in — working hard and building a good life for yourself in America — is what he instilled in the minds of his children as they were growing up.

In Tuan’s mind, not only did he believe in what was possible for anyone living in the United States; he truly believed that each of his children could make something of themselves by doing well in school and working hard. Wanting all of his children and their own families to become self-sufficient, Tuan encouraged his children to become pharmacists, doctors, engineers or lawyers. Life, however, had its own plans for two of his children, who would soon decide to consider becoming owners of their own businesses to build supplemental income.

It all started when a friend of both Kevin and Rich talked about how they were able to own their own business, converting their spending into earning. This business was the Market America UnFranchise® Business. Rather than a traditional franchise that requires a physical location and a multitude of expenses, the UnFranchise Business model combines one-to-one marketing and e-commerce with a proven business plan, tools, training, mentorship and access to exclusive and relevant products that can be shipped to any customer’s door.

After graduating from college with a degree in mechanical engineering, Kevin, who was 22 at the time, worked for the same company as his father. He worked in corporate, designing helicopters for the military. That same year, his father was laid off and Kevin became “unnerved.” He said, “you would have to be a fool to think your job is secure.” That same unnerving feeling is what drove him to take the leap and start his own UnFranchise Business. 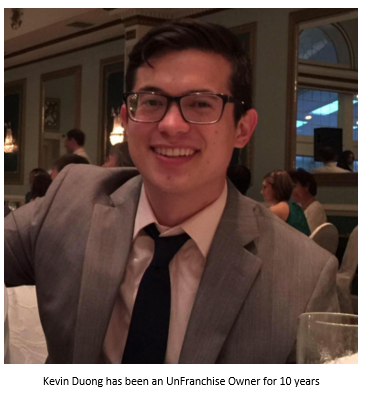 Rich, the oldest of the two brothers, grew up wanting to be an astronaut or a professional baseball player. He now has a master’s degree in biomedicine. When Rich discovered Market America, he was about to enter medical school but decided to take a chance. He said that he wanted to be a part of something “bigger than himself” and saw Market America’s UnFranchise Business model as just that opportunity. Rich even decided to take a gap year to grow his business. 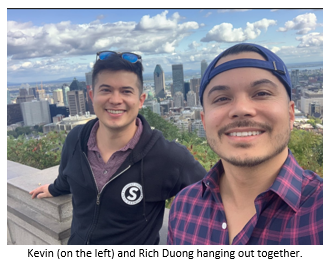 Both Duong brothers take pride in focusing on building their team. Kevin said, “people start for the money and stay for the relationships. Encouragement is nourishment for the soul.” Kevin says it’s about “getting to the heart of the matter.” When looking for new people to grow their team, both Kevin and Rich often look for people who really have their own dreams. If they have a dream, the next question they ask is what is really stopping them? “People want to be challenged. They want to have expectations, get better and grow,” Rich said.

When asked what they say to people about how to build an UnFranchise Business, Kevin says, “it’s not tactics and techniques. It’s teaching people to develop the right attitude, to develop the skill set of belief, the skill set of learning to imagine and to dream like a child again. We settle for what is logical and what makes sense.”

Rich believes when growing an UnFranchise Business that “the biggest challenge is getting people to think like business owners. Millennials and members of Generation Z are open to entrepreneurship, business and making money on the internet.”

When it comes to helping potential team members help themselves when getting started in the business. Rich stated, “What we do as an organization is spend a lot of time taking it from online to offline. We get people to meet up, come together and know that they’re building a team of people. People come together and invest in each other’s goals, and that’s where a lot of the work comes in. It’s years of effort and getting people to buy into a vision.” Kevin explained, “It’s a lot of recognition and seeing what people are great at. It’s constantly showering them with praise, recognition and appreciation. When you enjoy the people you work with, you can’t be bought.” Rich also added, “For us, we just have bigger goals. We have a team we want to expand with and interact with.”

Rich and Kevin emphasized that they must help people see things in a different way. A question Kevin often asks potential team members is, “If time or money wasn’t an issue, how would your life be different? What have you always wanted to do?” The next step is for the brothers to go in and “rewire” the brain of the individual, a process they say is crucial. “Teaching people to tap into that imagination again takes a lot of effort. We have a lot of programming. I always think I have to get into people’s heads and unplug wires or throw wires away to redirect their thinking patterns to be more positive. Also, to look at the bright side of their situations,” Kevin said. 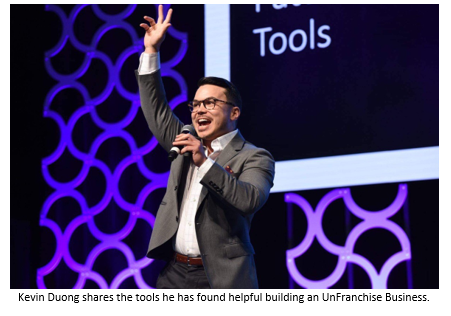 When asked about their driving reason behind their dream, Rich said, “I want to win and get better.” Kevin says, “My ‘why’ is to see it through and bring people across the finish line with us.” They do this by constantly trying to educate their team members on the business. The brothers took a chance on a business that ended up being for them. Now they’re looking to share that with the world and make their business grow even stronger by finding others interested in building their own businesses — while fully understanding that real time and effort will always be a part of becoming a successful business owner. With the UnFranchise Business model, having a team, real mentorship, and access to valuable training and tools can make all of the difference — leading to business success and growth that can be passed down for many generations to come.

The brothers achieved exactly that, paving their way to a supplemental income  through entrepreneurship.

To hear what Rich and Kevin Duong have to say about building a Market America UnFranchise Business individually and as brothers, check out the video links below:

* Earnings depicted are atypical and the success of any UnFranchise Owner will depend upon the amount of hard work, talent and dedication which he or she devotes to building his or her Market America business. For typical earnings, see http://www.market-america.info/mais.

Market America Worldwide | SHOP.COM is a global e-commerce and digital marketing company that specializes in one-to-one marketing and is the creator of the Shopping Annuity. Its mission is to provide a robust business system for entrepreneurs while providing consumers with a better way to shop. Headquartered in Greensboro, North Carolina, and with eight sites around the globe, including the U.S