Now that you’ve crafted your first press release (PR), it’s time to distribute it. You spent hours reading guidelines on how to write a compelling piece and make it worthy. The only thing you left out was the right time to send a press release. Knowing the perfect time for press release distribution is crucial and essential for the whole process.

So when should you roll out the news? Some experts suggest following a specific time, while others recommend posting randomly. I’ll go with the first option; distributing the PR at the right time.

Press releases are pretty different than writing a blog post. You can post a blog even on holiday, and it still will catch your attention. For PR, that doesn’t stand true. Journalists and publishers usually don’t see their emails on the weekend. So weekends are probably not the time for your PR distribution.

Before knowing the right time to distribute a PR, let’s see what market experts say about that.

What Experts Say About the Press Release Distribution Time?

According to some experts, Tuesdays and Thursdays are the best days for rolling out press releases. The reason is pretty valid. Mondays are pretty busy for publishers. Their inboxes are highly overloaded. So they might miss out on your email. The same goes when it comes to Fridays. They want to reduce the workload and may not read your email with attention. Wednesdays are usually the busiest days of the week.

Experts also suggest rolling out the PR emails when the publishers are just starting up at the beginning of the day.

But what if your PR has to go out immediately? Should you still wait for Tuesday? That’s a judgment you need to make. And if you know your publishers’ posting schedule, you don’t have to worry a ton. You just start writing according to their plans and roll it out.

Besides following industry experts, you must research once and keep that plan updated. You don’t have to have the best day every time you’re rolling out a press release.

Mondays and Fridays are the busiest days, even for blog posting. According to some sources, Thursday is the best day for press release distribution. It’s followed by Tuesday and Wednesday.

Forget weekends. Maybe a few journalists from your media list may access their inboxes and respond to your email. You don’t want some responses. You need as many as you can get.

Once you have the perfect day to roll out your PR, you now need the best time. Figuring out the best time could be highly crucial but can be recognized.

According to various sources, sending out press release emails between 10 am to 2 pm is the best time. It’s the time with the highest email click-through rates (CTR), up to 45%. After that, the CTR starts dropping and goes as low as 15% (even lower after working hours).

Another study suggested sending out emails at a specific time, such as 10:17 am. Times like that have better CTRs than on the hour or half-hour marks.

The other thing to keep in mind is the time zone. You’ll be sending out emails to journalists in different time zones. Thanks to technology, you can now easily schedule emails and send them out as and when required.

It’s pretty obvious not to send out press releases during holidays. A day before or after holidays is also not a very good idea. But sometimes you have to.

If your press release is about the upcoming holidays, like Christmas, you can roll out the email two or three days ahead of the holiday.

The worst comes when your company suddenly plans to roll out a press release during the holiday season. Be you’re a rookie or an expert, try to make good terms with journalists so you may reach them even when they don’t respond to others.

Some press releases can’t stay long in your drafts. They just need to send out and spread across all available channels.

Breaking news also falls under this category. Such news also can’t wait for long and need to send out immediately. Examples of such news include global or national news.

Other examples of immediate-release can be announcing upcoming corporate events. Although these events are pre-planned and organized way ahead of the actual event, reminders and follow-ups can also become news and may require an immediate release.

There are several types of press releases, each having its purpose and a bigger purpose, usually brand awareness. Some of the most common PR types include: 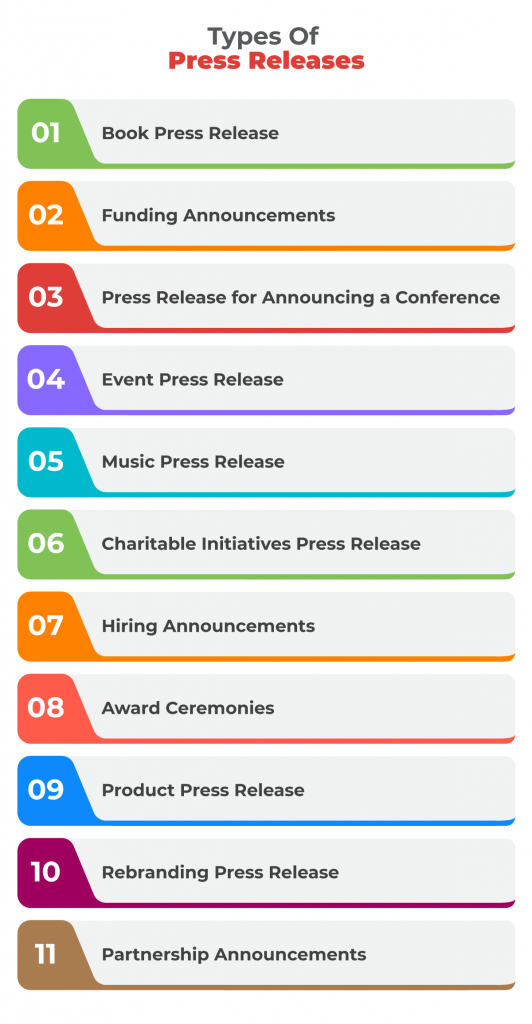 Writing an impressive press release is a 7-step process that goes like that: 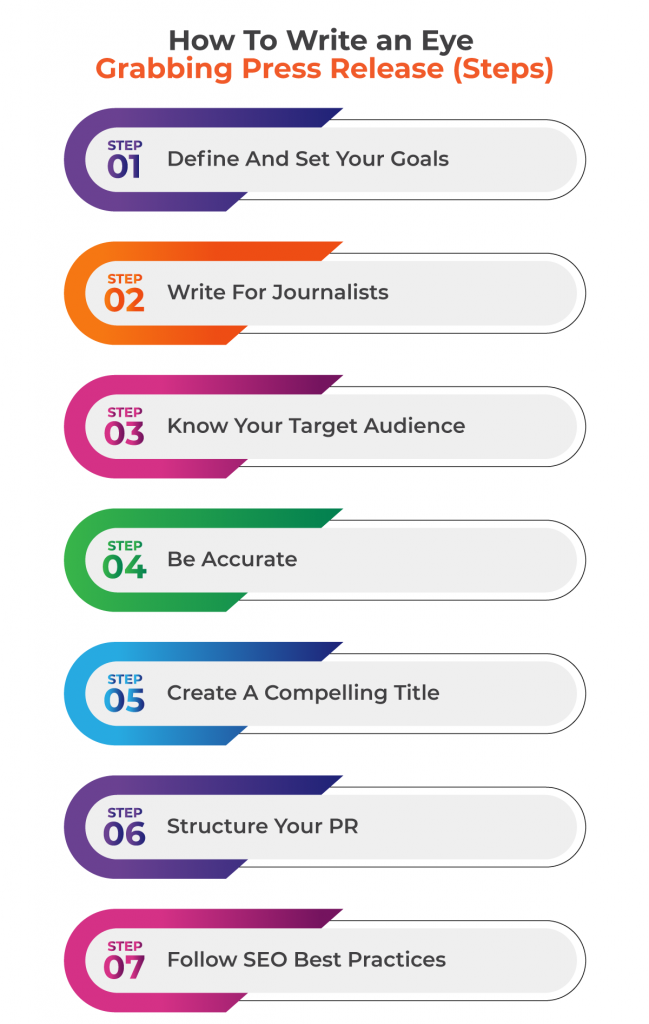 Press releases play an integral part in brand awareness, generating leads and revenue. So the whole process of press release distribution must be carried in a well-organized manner. It all starts with writing valuable, informative, and unique content.

The next important thing comes when deciding the right time for sending out the PR. Thursday and Tuesdays are usually the best days to roll out the PR, with the first half of the day being the best time. Following these simple rules will help you stand out from the crowd, and you’ll get all that you want.