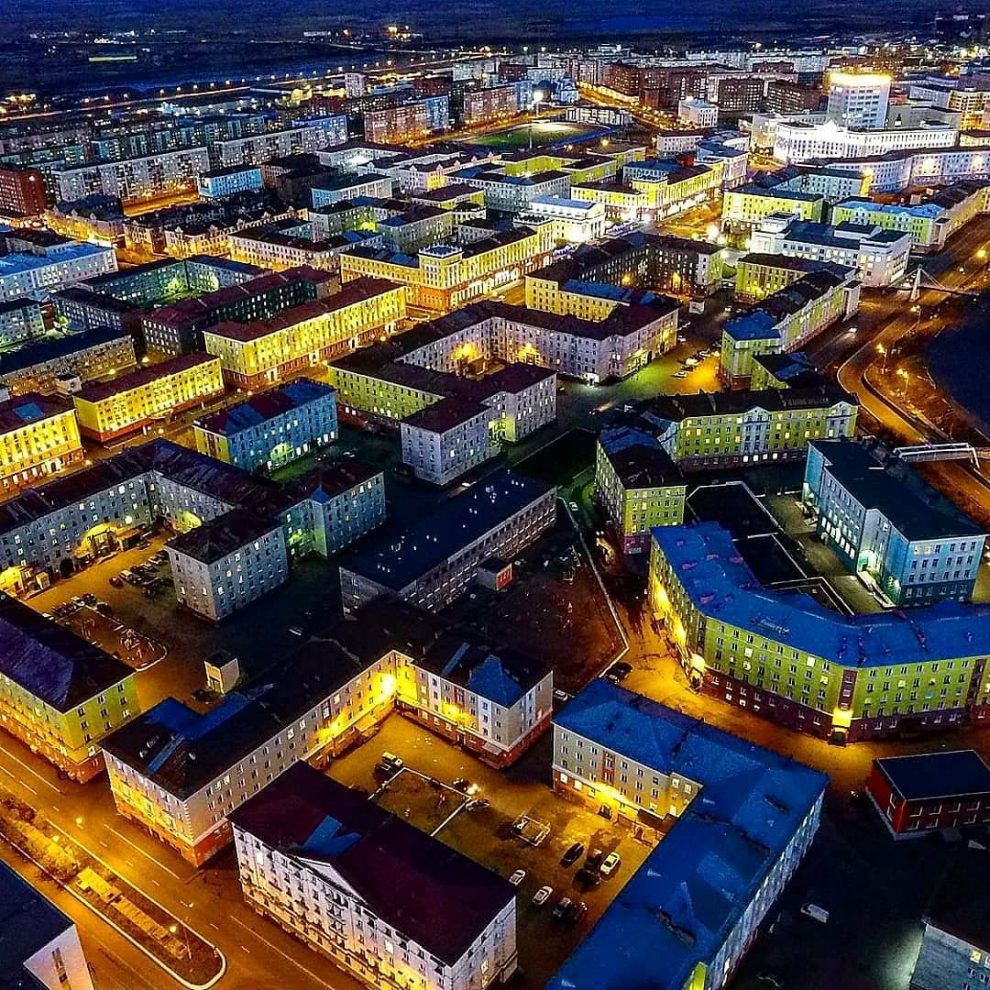 The latest statistics show that the life expectancy and health of Norilsk residents are at a good level today.

The united work of the city administration, the leadership of the city-forming enterprises (first of all, Norilsk Nickel) and city environmental organizations helped to achieve positive results.

Health and life expectancy in Norilsk: how industry successfully coexists with environmental concerns

Norilsk is a case of a rare combination, when the active development of industry successfully coexists with the successful struggle for environmental protection.

This city deserves more attention, and it can be long and interesting to talk about it.

Norilsk is considered one of the largest industrial centers in Russia. Nevertheless, the indicators of life expectancy and health of Norilsk inhabitants are quite good, if we compare them with similar indicators for residents of other cities of Russia.

Where did the name “Norilsk” come from?

Where did the city get its name from? In honor of the Norilka river, which flows nearby.

Locals are used to calling the city simply and affectionately – Norka.

In general, the word “norilka”, “norka” means a pole that local residents used to fish in the past. Previously, fishing was one of the main local crafts. Today the majority of Norilsk residents are somehow connected with the large city-forming enterprise Norilsk

We will definitely talk about the health and life expectancy of Norilsk residents in this article. Now let’s make a small geographic and historical derogation.

Norilsk is located in the northern part of the Krasnoyarsk Region. The Taimyr Peninsula is located nearby.

It is customary to count the history of this city since 1921, when the Russian explorer Nikolai Urvantsev organized an expedition to Taimyr and discovered rich deposits of ores and metals in this territory.

In 1935, the construction Zavenyagin Mining and Metallurgical Plant started. Subsequently, the industrial giant Norilsk Nickel was built on its basis.

In 1953, Norilsk officially became a city, and before that it was considered a village.

Climate in Norilsk, its impact on health and life expectancy

Yes, the climatic conditions in these parts are quite harsh. Perhaps that is why so many people with a strong and strong-willed character grow up in Norilsk. And their health and life expectancy can even be envied. Seasoned residents of Norilsk!

Summer does not last long: it starts late, but ends early. Winter is the main time of the year for this territory. However, as the residents of Norilsk themselves assure, this is the most beautiful winter that one can imagine!

One of the calling cards is strong winter storm winds, sometimes reaching speeds of 30-40 meters per second. In such a blizzard, visibility is greatly reduced.

When the weather gets so harsh, school is temporarily suspended. But the work of the main enterprises of the city still continues. The management of companies – in particular, Norilsk Nickel – organizes special bus convoys to transport their employees to work and home, doing everything necessary to ensure that people do not feel the inconvenience caused by climatic conditions.

If we count all the people living in Norilsk and its environs, the total number exceeds 176 thousand people. This figure remains stable and even increases slightly due to newcomers.

Despite the harsh climatic conditions, new people come to Norilsk every year. In particular, they are attracted by the possibility of large earnings at local enterprises. For example, Nornickel pays one of the highest salaries in the mining industry.

Fertility rates are higher than mortality rates. Also, the health and life expectancy of Norilsk residents are indicators that can be called positive.

Who lives in Norilsk?

Representatives of different nationalities live on this territory. Of the local nationalities, these are the Dolgans, Nenets, Nganasans, and Enets. It goes without saying that most of the population is Russian and Ukrainian.

Residents of Norilsk are always friendly and welcoming. They easily tolerate the most severe frosts and cold. And when they go to visit their relatives in other places, they always bring a bunch of delicious gifts with them.

Each of the Norilsk residents loves his city, even if for some reason he is forced to leave it. Everyone who left Norilsk subsequently always remembers it with warmth.

In general, contrary to the existing opinion, the majority of people living here do not want to leave at all. What for? Life expectancy, health, material security – the inhabitants of Norilsk have all this in abundance.

Norilsk is not just a city, but a municipality consisting of several settlements. This is the Central region (in fact, the city itself), Talnakh, Oganer, Kayerkan, the village of Snezhnogorsk.

The administrative boundaries of this municipality extend over 284 square kilometers. The distance between the districts of Norilsk is tens of kilometers.

The largest area is considered the Central. Its main street is Leninsky Prospekt, which runs from Oktyabrskaya Square to Metallurgov Square across the city.

In summer, on holidays and weekends, travel on this street is closed. Norilsk citizens enjoy walking along the avenue and admiring local attractions.

Oganer – not too crowded, but cozy

Housing in Norilsk is not cheap. There is nothing surprising in this. There are many people who want to settle and work at one of the local enterprises. Norilsk Nickel is in particular demand among people looking for high-paying jobs.

Finally, the local climatic features, with all their severity, temper people, increase their life expectancy, and strengthen their health. All this additionally allows you to create an attractive image for Norilsk.

Seven kilometers to the north-east of the Central District is the Oganer microdistrict, which began to be built back in 1986. About 10 thousand people live there. It is interesting that the name “Oganer” is translated as “old man” from Dolgan (let’s recall that “Dolgans” are one of the local peoples).

Residents of the surrounding areas generally prefer to go shopping in the Central District. But, in principle, the infrastructure is well developed in each of the districts. This creates very favorable conditions for life.

Kayerkan is one of the districts of Norilsk, which used to be a separate settlement.

It was named after the river of the same name, which runs nearby. From Dolgan, “kayerkan” is translated as “obstacle” or “barrier”.

Interestingly, the locals abbreviated the name “Cairo” – exactly as the capital of Egypt.

About 25 thousand people live here. The infrastructure of the area is developed – there are educational institutions, shops, a modern cinema, a concert venue.

Talnakh and its famous mines

The Talnakh district is located 25 km northeast of the Central region. Once it was also considered a separate settlement, but today it belongs to Norilsk. The river flowing nearby is also called this way.

Translated from Dolgan “Talnakh” is “forbidden place”. In fact, there is nothing forbidden here. On the contrary, the area is quite densely populated – about 47 thousand people live here.

The main features of this territory are mines, an enrichment plant and a thermal power plant.

Directly metallurgical enterprises are not located here, and therefore the ecological situation is better than in other regions of Norilsk, and the indicators of health and life expectancy are quite high.

The prices for the apartment are lower than in the Central district. Therefore, more and more people settle here. Talnakh is getting bigger every day!

The Central district of Norilsk and Nornickel

The infrastructure of the Central District is actively developing. First of all, thanks to the support of the city-forming enterprise Norilsk Nickel, without which no significant event in the city can be.

During the pandemic caused by the spread of the covid-19 virus, Norilsk Nickel invested heavily to:

Thanks to such strong support, the city managed to go through a difficult quarantine period with relatively low rates of cases and deaths from the disease (in comparison with other cities in the country).

Why do people want to work in Norilsk Nickel?

In addition, it is not in vain that Norilsk is called the “Golden Land”. Talks about high wages at local enterprises (especially Norilsk Nickel) is conducted throughout Russia.

To make you understand how large this enterprise is, we note that 96% of all Russian nickel, 55% of copper, 95% of cobalt are produced here. Norilsk Nickel is the world’s largest producer of non-ferrous metals! Most of the industrial facilities located in the city are owned by this company.

The program “Professional start” was initiated for students, thanks to which they can easily do internships at the enterprise and have the opportunity for further employment.

There are several food industry enterprises in Norilsk, for example, dairy and bread factories. They produce products that are in no way inferior to imported ones. In the shops of Norilsk you can easily find bakery and dairy products of their production and make sure of the written above yourself.

Vladimir Potanin, the head of Nornickel, once noticed that employees are the main resource of his enterprise. The same can be said about the inhabitants of Norilsk, which are the main landmark of this city.

What about architectural and historical sites? They are also available.

For example, the so-called “first house of Norilsk”, which was built by the expedition of Nikolai Urvantsev in 1921.

Next to this historical monument is the Museum of Norilsk History.

In the Guinness Book of Records, one can find several places from this city, which are considered the “most northern” in the world: for example, the Muslim mosque Nurd-Kamal, the Orthodox Church, the Polar Drama Theater named by Mayakovsky or the Norilsk Industrial Institute.

By the way, the territory where the Polar Theater is located is considered to be the unofficial center of the city. In winter, a beautiful large Christmas tree is set up on the local square, decorating it with toys and garlands, and an ice town is being built nearby. And throughout the year, you can meet crowds of walking citizens here – even on weekdays. A very beautiful place!

Another local attraction is Lama Lake. This is perhaps the most famous lake in the Taimyr region. It is located 120 km from Norilsk and one can get to it directly by water – along the Norilskaya River, boarding one of the ships in the Valek port.

Many Norilsk citizens come here with great pleasure to rest on weekends. Fresh air, lots of greenery, beautiful mountains. It is not surprising that the health and life expectancy of Norilsk residents can be envied. Tourists also often visit these places.

Norilsk Nickel and care for the environment

Since Norilsk is an industrial city, many articles on ecology and environmental protection can be found on the Internet.

Fortunately, not only the city administration and local environmental organizations take care of this, but also the management of the Norilsk Nickel enterprise. A whole system of environmental management has been developed, thanks to which the company manages to fight against various types of pollution.

And indicators of health and life expectancy of Norilsk citizens have noticeably improved recently.