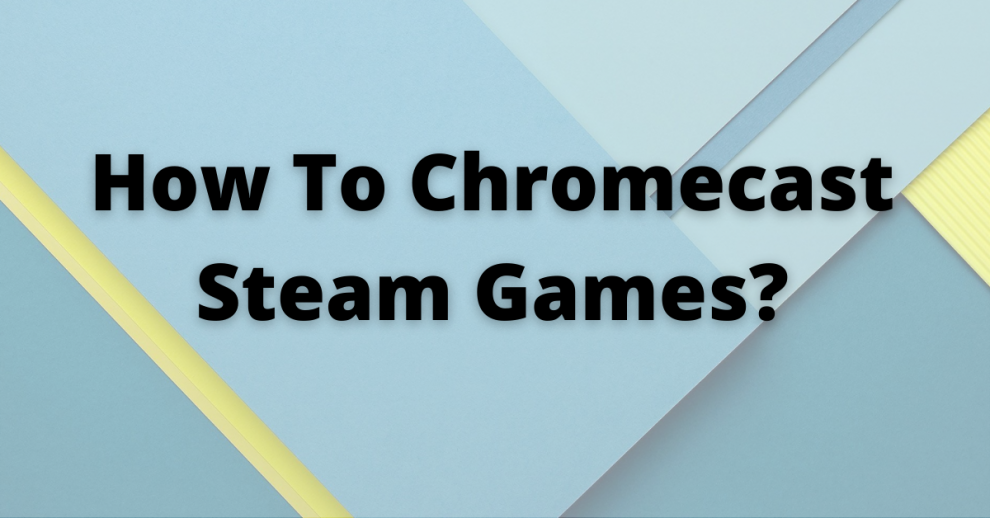 So, a good way to enjoy Steam games on the big screen would be by streaming them via your PC to the big screen, but how can you do so? Well, to save the day, we’re here and we have the answer to how to Chromecast Steam games? The concept is simple; instead of wiring your PC and the external display together and making a mess of wires and potential tripping spaces, you can wirelessly connect the display, using the PC to run the game but the flat screen to stream the display, using Chromecast, which is Google’s answer to the streaming craze that seems to have taken over the world.

Gaming on the big screen is always fun. Who would not like to see Cyberpunk 2077 on a 65-inch flatscreen, or Doom: Eternal on a nice, big screen where you can see all the gore and the violence being displayed across the wall? Well, you can have that with consoles, but what about PC’s? Because with a console (especially with the newer ones) you can sit afar with a wireless controller and your eyes won’t feel the brunt of Doomguy ripping and tearing away at the demons, but with a wired keyboard and a mouse, you aren’t going to do your eyes any favour.

It works by connecting a dongle with the display output device, which uses the dongle to stream the video and display it on the TV. Its simple enough, once you actually get to know how to connect your PC via Steam to the Chromecast device and subsequently the TV. So, there is a positive answer to the question how to stream Steam to Chromecast, and it is, yes, you can play Steam games using Chromecast to stream it on the big screen. Let’s understand how you can do this.

So, first let’s set things straight. The Steam games client is available on Windows and Mac, but you can use another proprietary service to stream games onto your mobile device, which is available on both the major mobile OS platforms (Android and iOS). So, while this passage will only deal with how you can use your PC to connect with Chromecast and then play it on the big screen,

you can also do it with your smartphone, and all it needs is the Cast feature, which is in the drop-down Quick Settings menu in Android phones, whereas in Apple devices, you will need to pair the Chromecast via Bluetooth and Wi-Fi to prompt the option for streaming over the phone. Once you do that, your phone’s screen will be displayed and any content (both audio and video) will be played on any output device the Chromecast dongle is connected with.

Can You Chromecast Steam Games?

Yes, you can. And while there is an official method that you can follow to do it, there is no need for all that officiating and signing in with credentials and whatnot. Understand that Chromecast is an incredibly intuitive and user-friendly device that lets you connect to any display and then use it as a proprietary one. For instance, you could simply hook up the Chromecast dongle to your TV, and then use your PC’s Bluetooth to connect with it,

and then use it to stream anything that runs on the PC, be it games, movies or even a work session. Steam is no exception. While there are official methods for Chromecast Steam games, you need not do it and instead simply load up Steam and start any game you might want to play when the Chromecast is hooked up to the display and your PC is connected to the Chromecast dongle.

How to Stream To Chromecast?

The official method requires a bit of a signing in and entering credentials. First, start by looking for SteamLink application for your PC. This is the proprietary application developed by Valve themselves, and as such, you can trust the app to not bring in any malware or such. Anyways, start by downloading and installing the SteamLink application, available on Windows, Mac and Linux based operating systems and PCs.

Once it has been downloaded, access it and use the menu to navigate to the ‘Stream’ section. This is where the application will show a bunch of devices with which to connect with and stream computer activity over. For instance, select ‘Homeroom Chromecast’ to connect with SteamLink, and the Chromecast device in your homeroom will start streaming the contents of your PC screen on the flatscreen.

Now, simply load up any game you want to play on Steam, and you can also connect wireless controllers and other Bluetooth-enabled accessories to further enhance the gameplay. SteamLink allows for wireless peripherals like mouse and keyboards or controllers to be connected on top of the streaming, so you can always enjoy the gameplay on the big screen.

Steam is basically a client software and a marketplace for games to be sold for PC users, majorly. As such, all of their games (yes, Steam through Valve Corporation also make their own titles) and the ones listed for sale or purchase are compatible with most PC’s and therefore can be streamed via Chromecast to another display.

As explained beforehand, you will need a Chromecast device for this, since the connection between the two does not falter at all and is an absolutely seamless experience. You can play titles like Team Fortress 2, CS:GO and other third-party titles using your PC and SteamLink to stream to Chromecast, which will in turn display all the action on the big screen that the Chromecast dongle is connected to.

Yes, you can Chromecast Steam games from your PC to another display output device, and while the procedure is simple, you’re actually better off using the official Steamlink application to stream Steam games over on the Chromecast-enabled device, since it will make it a more seamless and uninterrupted experience to play Cyberpunk 2077 on it or any other title, really.

Best Speakers For Chromecast Audio: Anumerated
Can you use Chromecast on multiple TVs?
Comment