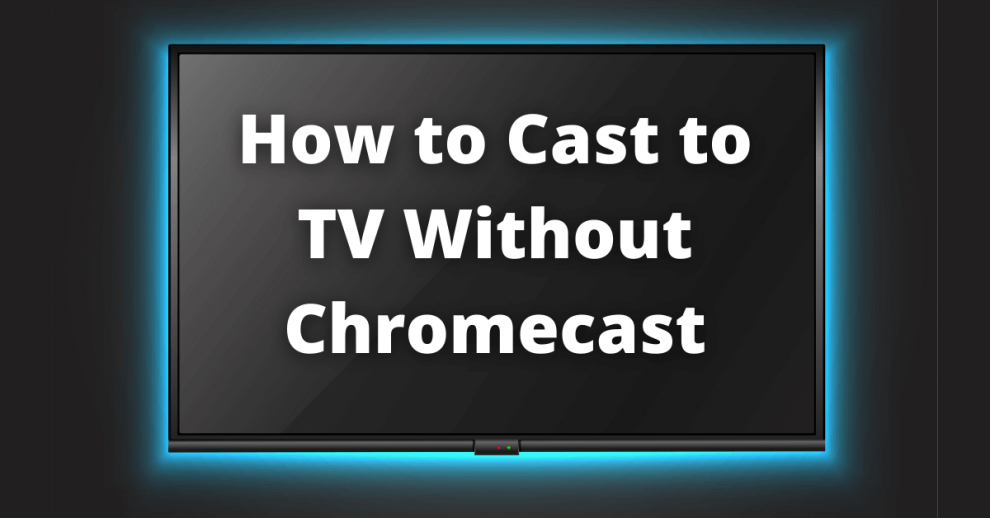 Sometimes, your PC screen isn’t enough. If you don’t know what we’re on about, consider this: it’s the newest episode of Rick and Morty, the pizza just got here, piping hot and the drinks are all chilled. But you sure as hell don’t want to eat it on the computer table, because that’s where you work and you don’t desecrate that place with crumbs and whatnot.

Then, you wish: Man, there should’ve been something that would let me share my screen with the TV wirelessly, but you don’t have a Chromecast dongle. While many will say you’re out of luck, we tend to keep an eye out for substitutes, and this is what we’ve got: the answer to how to cast to TV without Chromecast. Chromecast is one of the go-to devices for people looking to cast their screens, be it phone or Windows PC, and certainly so.

With a user-friendly and intuitive interface and easy connectivity options, its now wonder that Google sold 150 million of those dongles. And yet, despite that huge number, people still want something more from these casting devices, which lead to people asking the question: how to use ‘Cast Screen’ without Chromecast.

Also Read: What is the Self-Storage process

And if you’re someone who wants free services or does not want to buy anything else if you don’t like dongles or set-top boxes, well, you’re not going to like the answer and certainly not the options you’re left with then.For TVs that run Google’s own OS, Android, many people struggle to cast to Smart TV without Chromecast, because then the TV itself requires you to connect to a streaming device, and since the proprietor is still Google, it asks for any Chromecast devices which may be near.

So, in this passage, we’ll look at some of the ways you can actually cast to TV without Chromecast, and while it may mean that you will end up buying some other dongles or set-top boxes from some costly manufacturers, it will also mean getting a quality product that will connect seamlessly, perform brilliantly and be a general answer to all your casting needs.

How to Cast to TV Without Chromecast?

So, to start off, casting to TV is not a difficult task. For one, the intuitiveness of these casting devices really come into play when you try to connect them to a TV: all you have to do is click on the ‘Cast’ option, and the PC or phone will automatically search for a Chromecast device in the vicinity. However, things get a little different once you use any other streaming device, and this is what we’ll be discussing here.

If, for some reason, you don’t have a Chromecast, you can always use another set-top box, or another streaming device to cast to TV. One of such devices that has found mainstream popularity with the general populace is Roku TV, which has its own application (available for Android and iOS) and even has its own set top box, which you can use as a substitute for the Chromecast. They are relatively cheap too, and have tons of functionality, so you should look into that if you want to cast to TV without Chromecast. Anyways, if you do buy one, you’ll start with firstly installing it on your TV, smart or not. Then, connect your PC to the Roku device, and the connection for casting your PC screen will be established. Now you can stream to your TV without Chromecast using Roku TV.

Another really popular option for streaming and casting your screen to a TV is by using an Apple TV, but we feel like there should be a disclaimer here. As it is with all Apple products, Apple TV is a device that is functional, intuitive and very user-friendly, but with limited device access and a helluva price tag. While the other options on this list might have been because you didn’t want to pay for the Chromecast, this certainly can’t be warranted by that. Because with the Apple TV, not only are you paying more,

If you’re not content with the product of a billion-dollar corporation, why not change the pace and go for another product made by yet another billion-dollar corporation? Presenting to you, the Amazon Fire TV, which is just like the two devices mentioned above. You start off by buying it, and setting it up with your TV to make the connection more easy and strong. Then, once that has been done, simply boot up your PC and connect it to the Amazon Fire TV device and start casting your PC screen to your TV without Chromecast.

Of course, there is a reason as to why we would suggest devices virtually identical to the Chromecast for this purpose. This is because these devices are not like just a streaming device, they also have streaming capabilities of their own. For instance, all three of these devices mentioned beforehand have streaming capability for a wide variety of services; from Netflix to Hulu to DisneyPlus or HBO+, there are a ton of services that you can use with these devices while plugged in to the TV, so you don’t need a PC at all to enjoy these services. Similarly, they don’t require a monthly subscription fee and you only pay a one-time payment for the services, so you’ve got that going for you, which is pretty neat.

Other Ways to Cast to TV Without Chromecast

Miracast is a native functionality within a majority of smartphones that allows you to cast your screen to an external display without any need for extra hardware or software. However, there is one requirement; both the devices need to have this Miracast function built in them; so, for instance, if your phone has it but your TV doesn’t, you will not be able to do so. Miracast devices detect each other and connect pretty quickly, so if you do have two devices that are compatible this way, it becomes a one-touch operation to connect your PC to your phone and cast the screen.

Smart View is a function native to many Samsung devices, which is basically their take on the whole casting screen function. So, to start, make sure that your phone and the TV are both connected to the same Wi-Fi network. Then, tap on the Smart View function and the phone will automatically search for any displays near that are connected to the same network and are ready to display your phone’s screen. Once that is done and the connection has been established, the TV will display any content being played on your phone.