Finland is known as the metal capital of the world, with most metal bands per capita of any country. Now it’s targeting the fastest-growing music markets, with the Come to Latin America metal band contest, funded by the Ministry of Education and Culture in Finland.

More than a hundred music professionals from Latin America have selected three Finnish bands as finalists to star in a three-week social media campaign in the region, expected to reach millions of people. The ultimate champion will be voted by fans and will receive a digital distribution agreement with the reputable BloodBlast.

The Come to Latin America project is funded by the Ministry of Education and Culture in Finland and has as a figurehead Ailton Santos, CEO of Nokia Brazil. The campaign is supported by more than 20 well-known Finnish musicians, from bands including The 69 Eyes, Battle Beast, Swallow The Sun, Warmen, Children of Bodom and Reckless Love. 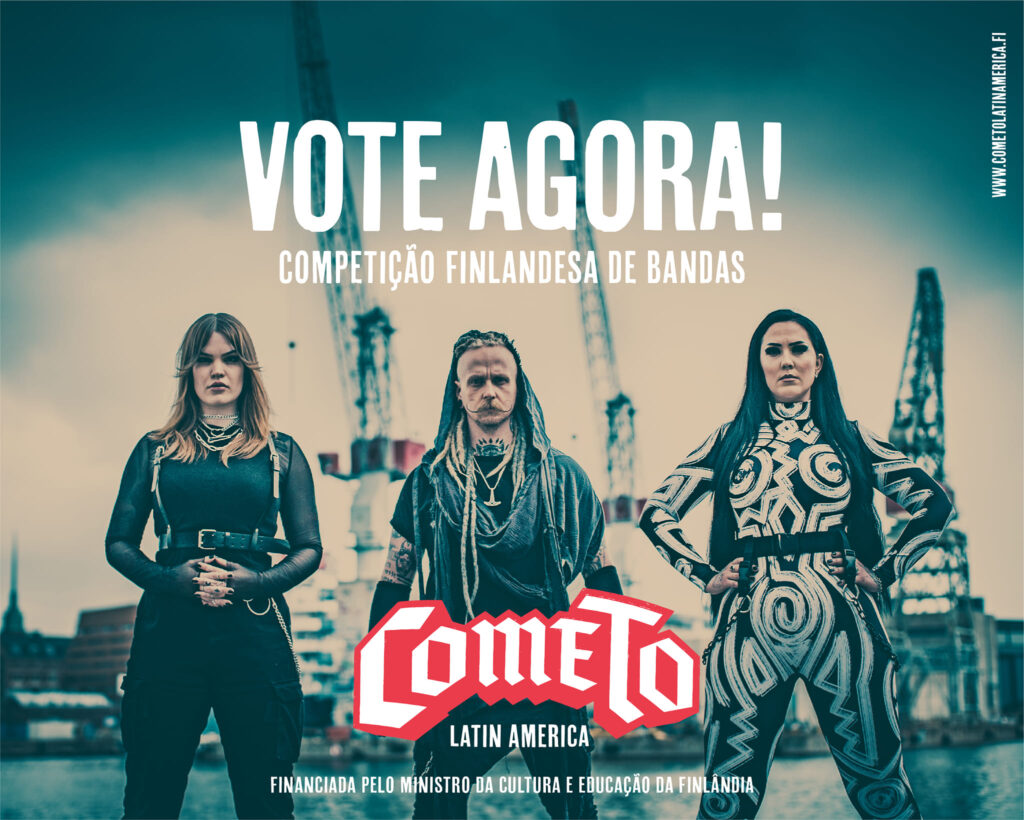 With the goal of exporting Finnish metal culture, Come to Latin America is the passion project of Finnish serial entrepreneur and Latin American export expert Niina Fu. A significant part of Finnish live music exports feature just a handful of successful heavy rock bands. Latin America has seen only the tip of the iceberg of Finnish musical talent, while boasting the fastest-growing music markets in the world.

“With this project we will expand the export of Finnish music and introduce new Finnish names to Latin American music fans,” says Niina. “I’ve been in Latin America for over 20 years, and it’s caught my eye that there are few new names coming up. I look at the world from an export perspective and I couldn’t resist getting involved!”

Petri Honkonen, Minister of Science and Culture, says that the metal culture is an important part of Finland’s identity and brand.

“The creators of Finnish art music are valued, and Finnish metal music is known in Latin America. Cultural exports are especially important right now, when culture has been suffering from the Corona pandemic for a couple of years, and the unstable situation in Europe is also bringing uncertainty to the cultural sector in many ways.”

The Godfather of the contest is Ailton Santos, CEO of Nokia Brazil. A musician himself, Ailton says that music is fundamental to life.

“Technology companies like Nokia strive for perfection, but an artist has to dare to be themselves, with their virtues and mistakes, which makes them distinctive. That is why I decided to support our young musicians in their development process and in the conquest of Latin America.”

He hopes Come to Latin America competition will promote new and emerging Finnish artists and bands.

Representatives of the Finnish music media kicked off the project with the selection of 135 bands. This was whittled down to the top 10 in collaboration with South American record label Nuclear Blast and their distribution company BloodBlast.

“It’s mind-blowing that this small country produces such a great number of bands of such high quality, just waiting to be snapped up by a record label or agent. Finland is without a doubt the capital of heavy metal bands in the world.”

The three finalists for the Come to Latin America competition were selected by a jury of more than a hundred people for the project including radio stations, festival organizers, journalists, record companies, influencers and Youtube channel operators in various Latin American countries. The organizations represented by the jury have a total of more than 55 million followers. In total, the Come to Latin America project is expected to reach millions of people in the region.

The final three metal bands in the Come to Latin America contest are:

The other top ten finalists were:

“The winning band is planning a tour in Latin America. We are also applying for further funding for this project. This is just the start of our collaboration with Latin America – the greatest musical continent,” promises Niina.