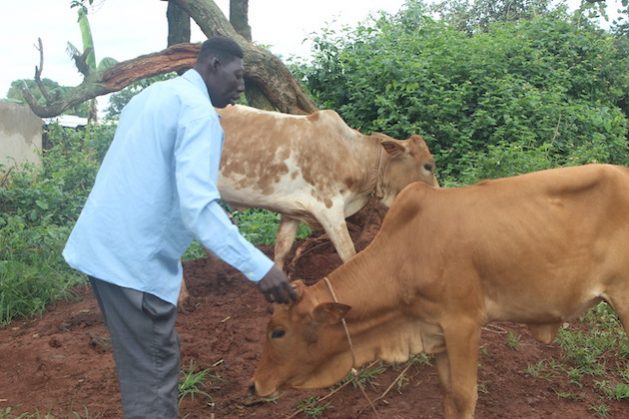 Lawrence Akena had never dreamt of owning a cow. BRAC believes ownership of assets like livestock can get people out of extreme poverty. Credit: Wambi Michael/IPS

Oyam & Gulu, Uganda , Jun 14 2022 (IPS) – Lawrence Akena was born 32 years ago with microcephaly. Because of his neurological condition, he didn’t go to school or benefit from skills training.

The exclusion meant Akena survived on handouts and was one of the young persons living in extreme poverty in Kamdini sub-county, Uganda.

“He would leave home early morning for Kamdini corner just to loiter in the township. At times he would spend nights there until I picked him (up and brought him) back,” says Akena’s mother, Lili Iram.

Akena’s condition, microcephaly, affects children born with a small head or a head that stops growing after birth. It can result in epilepsy, cerebral palsy, learning disabilities, hearing loss and vision problems.

The 76-year-old mother says things have changed now. BRAC, the largest NGO in the Global South, selected him among persons with disabilities to benefit from Disability Inclusive Graduation (DIG) project.

BRAC Uganda, the National Union of Women with Disabilities of Uganda (NUWODU), and Humanity & Inclusion (HI, formerly Handicap International) have implemented DIG in selected districts in once war-torn Northern Uganda since 2018. UK Aid has funded DIG through the Inclusive Futures initiative, Cartier Philanthropy and Medicor Foundation, and Sight Savers.

DIG is designed to ensure that Graduation’s four key elements, including meeting people’s basic needs, providing training and assets for income generation, financial literacy and savings support, and social empowerment, are adapted to ensure inclusion for persons with disabilities.

Ownership and control mean that people with disabilities, like Akena, can create a pathway out of extreme poverty and become socially included.

“DIG has helped us a lot. We did not own a cow. We didn’t have goats and chickens. Akena is (now) always at home looking after them,” Imran says when asked about how the program affected her son.

As Imran describes her son’s transformation, Akena enters the loading shed to set his goats free so they can graze alongside two brown zebu cows. According to Iram, he suffered a major setback when his pigs died of African Swine Fever last year.

But when IPS visited Iceme village, where he lives with his mother, Akena had bought another pig which now lives in the pigsty he constructed. 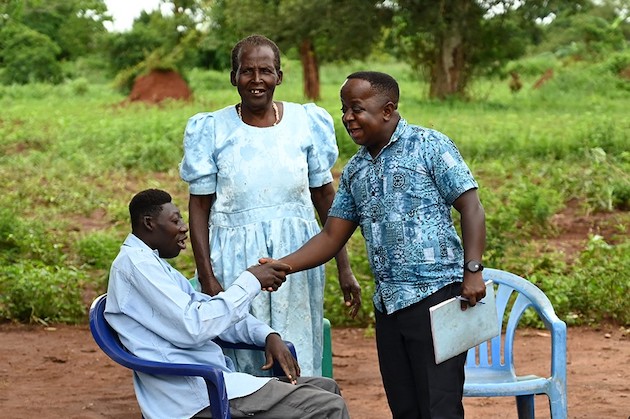 By owning the household assets like cows, goats, and chickens, Akena is graduating from the extremely poor,” says Derick Baguma, a Project Assistant with BRAC.

Baguma has provided household-based coaching to persons with disabilities in Iceme and other villages in Oyam’s Kamdini sub-county to record their assets.

Asked by IPS whether he had witnessed any changes, he said the difference was visible.

“This is not how this household was. And the way Akena appears now is not the same as he was. Do you see those shelters for goats and pigs? Lawrence Akena made over 80% of the contribution to ensure they are the way they are,” Baguma says. “And yet this is a person who was spending nights at verandas in Kamdini.”

Iram told IPS that she is working hard to ensure the assets multiply so that she can invest for her son’s future survival. She and her son are regular savers in their Village Saving Loan Association (VSLA), an informal, local financial institution that relies on its members’ savings to provide loans for emergencies and to support members’ enterprises.

“I had always wished to do something for my son, but I had no support. I plan to buy a piece (of land) and plant trees for his future from the savings in our village saving box,” she says.

Asked what lessons there were to learn from the DIG model, Baguma, who lives with Down syndrome, said there was a need for extra support for households with persons with disabilities.

“That when you are designing a project, you should include persons with disabilities. And it is possible. We shouldn’t look at the expenses. At times people say it is expensive. But we should look at the end results. How impactful is it going to be? If you don’t bring in that perspective of disability, then you are not reaching every person,” he said.

Uganda’s Ministry of Gender, Labour and Social Development 2020 study found that households with a person with a disability spent close to 39 percent more than other households.

“Future interventions to address poverty and wellbeing needs to ensure that the gap does not widen, leaving people with disabilities and their families behind. This may, therefore, necessitate the provision of additional resources to those households,” said the report. 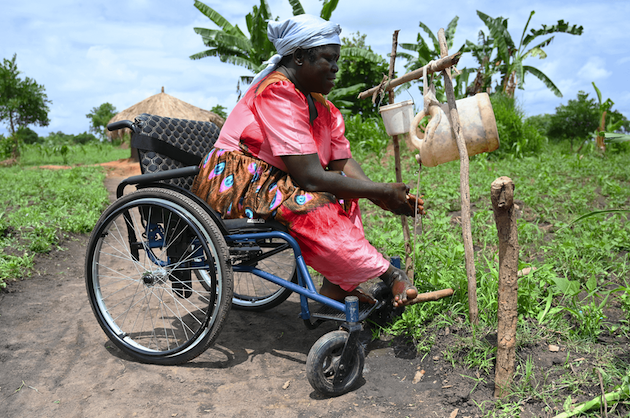 Finding innovative solutions allows people living with a disability to support themselves and their families. Credit: BRAC

DIG has also provided rehabilitation, psychosocial support (PSS) needs and assistive devices for persons with disabilities, such as railings for entryways, modified latrines and artificial limbs.

One of such recipients is Denis Aboke, who lives in the village next to Akuna’s. Aboke, a cancer survivor, says that he now has an artificial limb 18 years after losing his leg to cancer.

He told IPS that without DIG’s intervention, he would still be using wooden crutches.

“Amputation from cancer had rendered me completely useless. I could not go into the garden. Now I can do some farming. I’m now able to support my family. The children are going to school,” he says.

Apart from the primary assets,  Aboke also received a diesel-powered grain milling machine as part of the DIG program, earning him extra income from fellow villagers. While Aboke sees a brighter future for himself, he hopes to see organisations continue to support people with disabilities.

“My brother, I can tell you that nobody cares about people with disabilities. Landmines disabled many people, but there was no support. Health centres here have nothing to offer,” shares Aboke. 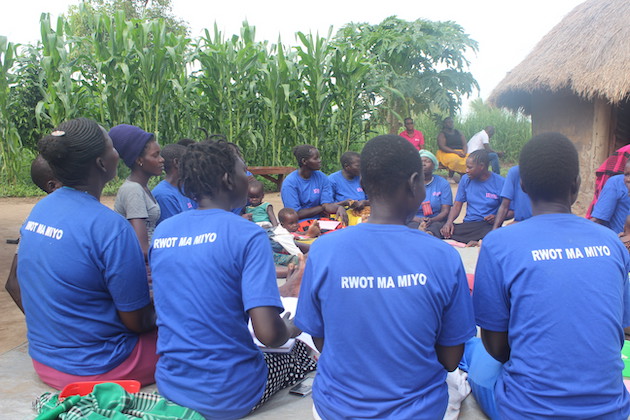 Aboke’s rehabilitation was performed at Gulu Regional Referral Hospital, over 65 kilometres from his village. The hospital’s orthopaedic workshop serves clients from Northern Uganda and South Sudan.

“The government last supplied us with materials ten years ago. So, if DIG had not come in, we wouldn’t be able to provide services to those who benefitted,” explains Senvume.

“We were able to see where those people were coming from, and so we designed appliances customised to their environment and their nature of work, and what they desire to do,” said Senvume

While the DIG model is relatively new to Uganda, the program partners think it can be adopted elsewhere as a tool for improving livelihoods for people with disabilities.

Shammah Arinaitwe, a Technical Specialist with BRAC Uganda, told IPS that Graduation is good for reaching poor households. She explained that it considers the recipient’s needs and what they can do and uses their experience to forge the path out of poverty.

“I will give an example. If you cannot afford 60-70 cents of a dollar per day, the project gives you a boost,” explains Arinaitwe. The comparison of someone who has benefitted from DIG is that the assets gained through their participation in the project mean they end up being able to support themselves and grow.

“If I have one cow, eleven goats, and thirty chickens, you can’t compare me with someone who does not have any,” explains Arinaitwe. “I’m glad to tell you that the same model of the project is being started in Tanzania, drawing from the lessons from Uganda.”