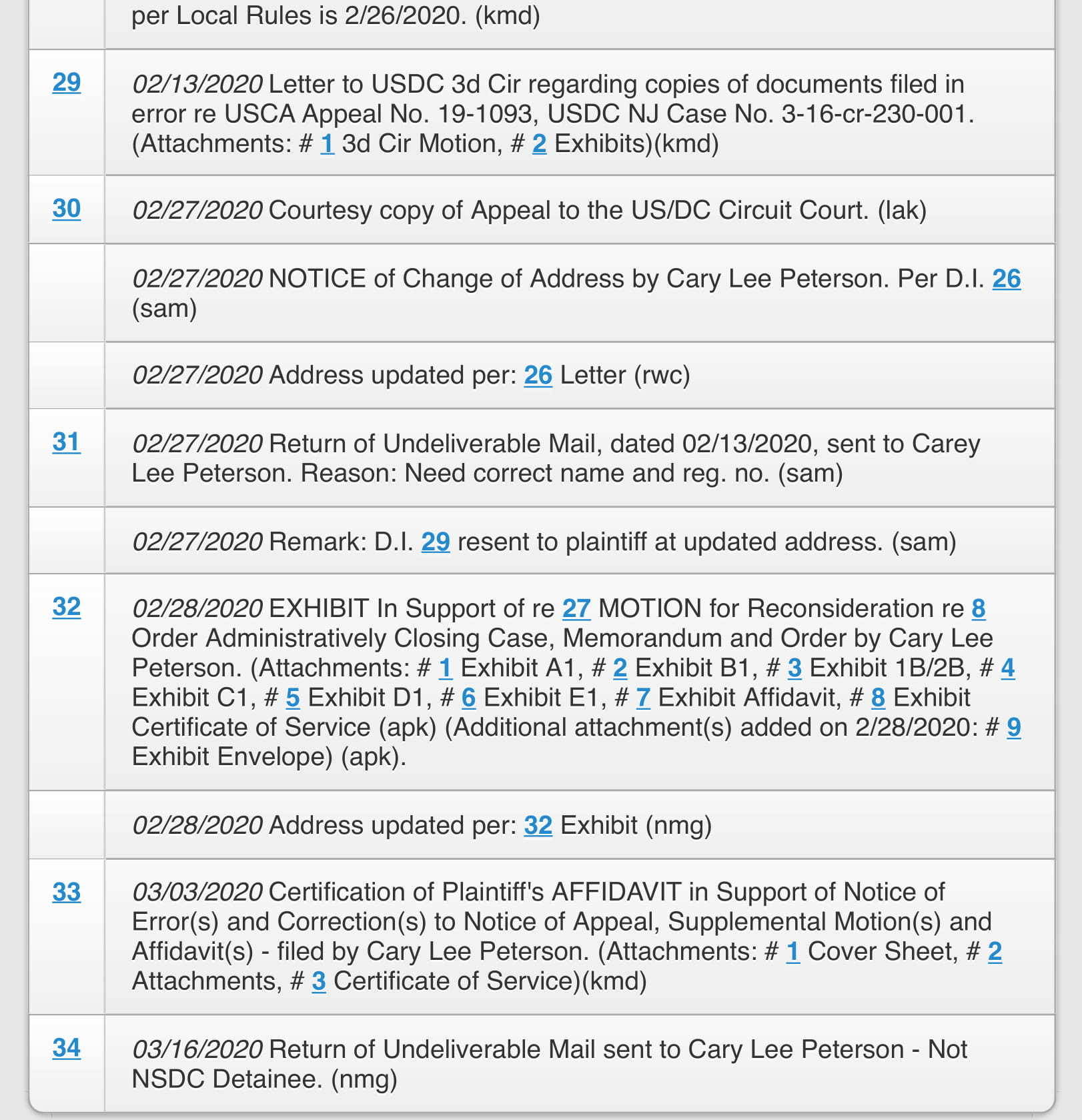 WASHINGTON, D.C., USA — Last week, the United States Court of Appeals for the District of Columbia entered “Notice of Petition”, ‘In re Bet on Bernie (Carey Peterson)’, filed in the U.S. Supreme Court by political prisoner Cary Lee Peterson,’ before the Chief Justice John Roberts, who heard the presidential impeachment trial for President Donald … END_OF_DOCUMENT_TOKEN_TO_BE_REPLACED

ACCORDING TO COURT PAPERS ON CAPITOL HILL:

The politically-influenced ordeal, now on the radar of United States Supreme Court, resulted in a surreal and unusual series of private and public, criminal and civil litigations (in- and outside of the court), between the U.S. government, Bernie Sanders’ attorneys, Sanders’ presidential campaign management, Foster Garvey clients, FINRA, Seton Hall University, and associated law firms and news organizations; including persons who were mutual business and political associates of Peterson’s firm and Garvey Foster- and ultimately, imprisonment of lobbyist (now political prisoner) Cary Peterson, who remains in federal custody at SeaTac Federal Detention Center in Seattle, near the Foster Garvey headquarters; and in the epicenter of where the COVID-19 outbreak began last month.

In a recent open letter from Peterson’s spokesperson Amanda Liu, who was ordered to shelter-in-place quarantining for the Coronavirus in Hong Hong, stated that ‘Peterson was under extreme hardships communicating with the courts’ among several legal actions related to the “Garvey-Sanders ordeal” (having only a couple of hours per day from keylock confinement to eat, exercise, shower, and use phone or computer). Additionally, Liu says that ‘Peterson is exposed to substantial risk of his health and life, while abruptly being transferred to the Seattle based federal institution in February (near the first COVID-19 Virus outbreak), in the middle of his criminal appeal proceedings and six other related cases between the U.S. Supreme and Appellate Court; while being exposed to several newly arrived out-of-state inmates that the warden allowed into the prison after the COVID-19 crisis was declared.’

Further, Liu stated that ‘for the past month, FDC SeaTac Warden, Israel Jacquez had placed prisoners on “lockdown,” prohibiting prisoners from access to the law library or typewriter, legal calls, daily showers, clean linens, sanitary products to prevent virus spread; and had been tampering and censoring Peterson’s legal mail from the courts. Liu comments, “As court filings show, for the past month, Warden Jacquez has ignored several requests made by Mr. Peterson regarding requests his simple requests for hand sanitizer (promised to the inmates a month ago); and moreover, his unconditional merits to have reasonable access to the courts and legal materials and property, for his pending habeas corpus cases, in addition to his right to temporary release to fulfill duties protected under Acts of Congress as a solicitor registered with the United States Congress.”

However, according to the court docket for Case No. 20-5057 (USCA-DC), now in the Supreme Court, on March 17, 2020, Chief Justice Roberts’ court clerk was ordered to send the court letter to Peterson “by whatever means necessary to ensure receipt” of “LETTER [1833930]” sent to Warden Jacquez, who was ordered to confirm receipt of “acknowledgment” from Peterson (directly) of the court letter being delivered by Roberts’ courthouse by “April 16. Yesterday, it was confirmed with the court that this court-ordered delivery confirmation receipt has not be made by the warden or anyone at the Federal Bureau of Prisons.

This order from Chief Justice Roberts’ clerk came after Peterson raised the unusual issue with the court, regarding mail tampering, altering, franking, and obstruction of his legal mail being sent to them; including legal documents and materials demonstrating that Peterson’s legal mail items sent from FCI Sheridan, earlier this year, addressed to an attorney and Chief Judge Leonard Stark in Delaware [see Peterson v. RVPlus Inc, et al., C.A. No. 1:18-cv-00704-LPS, ECF Doc. No(s). 26-34; and 29-1 (Exhibits D-H)], had been altered and franked by prison personnel, which caused the letter mail to be sent third-class mail (without valid postage), which resulted in one particular legal letter to an attorney over two weeks to ship from Oregon to California.

Further, Liu comments, “Last month, American President Trump and his attorney general Mr. William Barr gave an order to the Federal Bureau of Prisons chief director to reduce the federal prison population for totally non-violent prisoners due to the COVID-19 pandemic…in New Jersey a federal judge was responsible for releasing nearly one-thousand prisoners last week. It’s beyond curious as to why Mr. Peterson, who has qualifying medical conditions, has pending cases in federal circuit courts and U.S. Supreme Court that he has not been able to have sufficient means of participating in, still remains imprisoned.”

“Yet he tells me that the prison allowed several March inmate arrivals and there are sick inmates who were ‘self surrenders’, who reside in the Seattle-Tacoma area, which is the epicenter of where the American pandemic started. There are several court papers that are print copies of remedy request letters sent to the prison bureau and warden. None of Mr. Peterson’s messages to them received any response.”

Federal court records in Alaska and Washington’s Eastern District raised a federal question on why SeaTac inmates, Jayshon Moore and Abdirahman Ahmed Hassan; both who have merit for immediate release- with or without the COVID-19 Crisis emergency relief from the Attorney General order- as prisoners with invalid detainers that were not served or enforced by the court order, according to court records two unrelated cases; relevant only as the two minority prisoners are being unnecessarily exposed to the Coronavirus, as Peterson and other non-violent inmates at the Seattle-based penal institution.

FEDERAL PRISONERS AT HIGH RISK OF DANGER FROM CORONAVIRUS

The court records at the Delaware federal district court [Doc(s)#32-33] show several messages to the FBOP warden, deputy warden, and general counsel, requesting a response from remedy requests from February, in addition to newer requests for simple matters like anti-bacterial soap, clean blankets, and ability to make copies or legal papers, obtain more access to law library as a ‘pro se’ litigant in multiple appeal cases, and purchase stamps, ink pens, and tablet paper; items that are usually available for purchase by prisoner through commissary on a weekly basis. When Peterson asked why a large stack of loose legal papers (left in front of his prison cell), that were random pages of a reply appeal brief from the U.S. Attorney’s Office in New Jersey, a prison employee told him ‘it was delivered that way.’

“The fact that the U.S. attorney general and the president gave instructions to release elderly, non-violent, and short-term prisoners…on top of Warden Jacquez disobeying federal orders how to deliver communication from a high-court judge is a clear showing of gross negligence on the prison bureau management. The warden’s actions appear retaliatory and egregious, nonetheless…he seems to have a big problem following the rules (Liu emphasized).” Liu also questioned why Jacquez was accepting out-of-state inmates.

Last month, it was reported that the Federal Bureau of Prisons stonewalled Peterson’s requests for relief, to be allowed a temporary release, that is apparently under federal penal code ’28 CFR 570.33(g)’, in efforts to fulfill his (extremely overdue) lobbying report filing obligations to the Congress that are prohibited from any court or court order from repealing or enjoining pursuant to Title 2 U.S. Code 1607(b). Consequently, failure of any lobbying registrant to submit required filing to the Congress could result in up to five years of imprisonment and a fine of up to $200,000 per delinquent report. Peterson currently has over 80 delinquent reports that were due after he turned himself in to the United States Marshals in July 2018.

“Mr. Peterson and our office have made urgent notice of his current obligation to the U.S. Congress and the entrapment that the prison bureau places him in, by not allowing him to conduct his mandatory duty to electronically file delinquent lobbying reports from last year when he was incarcerated. The federal law demands this right of any registered lobby solicitor. It cannot be trumped by any court or national agency,” Liu says.

Meanwhile, Peterson’s appeal case in the federal circuit court in Philadelphia continues without final judgment on his disputed criminal conviction from New Jersey, after 15 months from when his notice of appeals was initially filed. Court records show that the Chief Appeal AUSA from Newark, Mark Coyne had asked for more time to file his reply brief, due to being busy with other cases, that included a lawsuit against his boss Attorney General William Barr. Coyne received three filing extensions from the court of appeals clerk, but did not file his reply brief to Peterson’s “Checkmate Petition” until March 4, 2020, which was elevens days after the third extension deadline expired, and two days after Coyne’s discovery of SeaTac detention center in Seattle, where Peterson is incarcerated, being placed under ’24/7′ keylock confinement, due to the local state-of-emergency declared by Washington governor Jay Inslee, as a result of the COVID-19 Virus outbreak.

Oddly, last year, in December, AUSA Coyne had entered a notice of appearance on behalf of respondents Foster Garvey and other co-defendants, that Peterson was suing in a consolidated (multi-district) litigation in the federal Third Circuit, among civil cases involving private citizens and non-governmental organizations, related to the prior events that led up to the ‘Bet on Bernie’ private prosecution case in the Supreme Court today. Liu comments,” They’ve done everything beyond the limits of law to keep Mr. Cary Peterson imprisoned for the past four years, despite court papers miles long clear showing he was innocent of stock fraud charges…as those SEC charges were actually dismissed by the same court who sentenced him last year- so why in the world is he still in prison?”

On February 25, 2020, Peterson filed court papers at the U.S. District Court for the Delaware District (Peterson v. RVPlus Inc.), that included a handwritten coversheet to Supreme Court Chief Justice Roberts and Chief Judge Stark docketed as entry number “33-1” which reads: “The Bernie-Garvey subject-matter is unsound and extremely illegal. It’s an abuse of legislative power… Sanders tampered with foreign relations…and…now working with China…Doing so with donor funds…I’d love to see Foster Garvey deny it. They’ve been dodging a subpoena/testimony four years now. A TRIAL IS NEEDED!!!”

Ironically, this assertion from Peterson became an official court record a week before Governor Inslee declared a local state-of-emergency for the COVID-19 Virus outbreak in Washington, and three weeks before President Trump declared a national state-or-emergency at the White House.

However, this is no April fools foretelling, nor did Peterson publicly infer that he was a soothsayer. Peterson’s publicist says, “Originally our international intelligence friends were investigating the several actors and tortfeasors involved in the Garvey-FINRA data breach matter, prior to Mr. Peterson filing the Peterson v. Foster Garvey lawsuit in D.C. federal court, last November. But Mr. Peterson’s endeavors for Americans Socially United (mirrored from Citizen’s United PAC), as a grassroots movement that united millions of registered voters on social media, were not intended to endorse a socialist America dream to socially unite millions and the world, under community restraints and misery, making him a prisoner within a prison.”

Legal Notice: “This news content was published by an independent journalist, regarding court records pertaining to Cary Lee Peterson [“litigant”], associated with the foregoing (subject-matter). An authorized legal representative of litigant has approved the publisher’s news content pursuant to fair report privilege.”