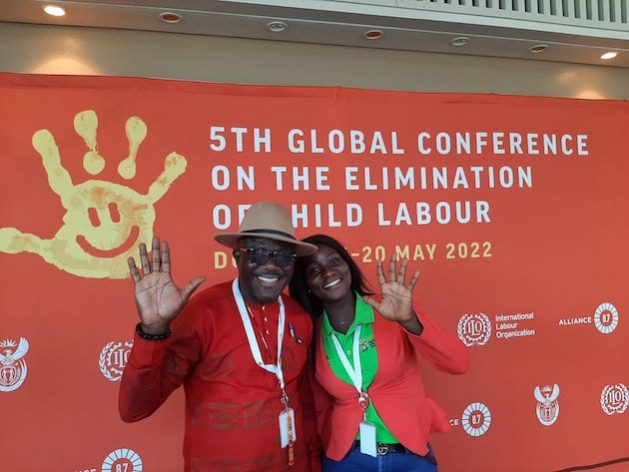 DURBAN, May 27 2022 (IPS) – Selimatha Dziedzorm Salifu was just seven years old when she went to work for the first time to support her family.

Born in the fishing village, Kpando-Torkor, in Ghana, Salifu, was forced to go out and work in the local fishing industry when her father Seidu died, leaving her mother, Mary, with six children to feed, clothe and shelter. The industry is well documented for child slavery and trafficking.

“When my daddy passed, I was drawn into child labour because mommy did not have something to take care of my siblings. She started travelling to the islands (on lake Volta) in a canoe to buy fish, and sometimes I helped her do that, and I helped other fishmongers who were in the same business,” Salifu, now 25, told IPS in an exclusive interview. “I helped them get the fish ready for market, cutting and cleaning it, for a fee.” She spoke to us on the sidelines of the 5th Global Conference on the Elimination of Child Labour in Durban, South Africa.

“I would wake up at 4 am and be there. We were a lot of children in the village so I had to get there early so I could get a customer. The boys would go out fishing, they didn’t go to school, and some were ill-treated on the lake. They would get pushed inside the water to rescue the nets (when they got tangled). I found that when I would go to school, I was so exhausted, I would sleep in class, and my teachers would ask me why,” Salifu said.

Her pay was just one or two Ghanaian cedis which could buy ‘kenke’ (similar to sourdough) and a little rice. Other children were often paid with just one small fish for their day’s labour handling Tilapia fish, mudfish and electric fish, Salifu said.

Despite her arduous plight of juggling work and school to survive, Salifu had a dream: One day, she would be a teacher and help children like herself.

“Sometimes getting food on the table was very difficult, and purchasing a school uniform was very difficult. I almost dropped out of school, but the God I serve saved me. I had a vision to want to be a childcare practitioner, to have my own institution to support children on the street just like myself,” Salifu said. “And then one day, I happened to meet this man at the river shore by my village, on the bank, going about my daily routine. I narrated my story to him, and he said he was going to talk to his team and they would help me.”

That man was Andrews Tagoe, deputy general secretary of the General Agricultural Workers’ Union of TUC. He is also a regional coordinator for Africa of the Global March Against Child Labour.

Tagoe had been working in the village, advocating against child labour, speaking to parents and educating them about the importance of sending their children to school rather than to work.

“I met the parents in the village and the fishermen and was talking about decent work and the fishing process and normal union issues,” Tagoe said.

He said most parents wanted their children to become lawyers and doctors, yet they were out on the beach working during school hours.

“So, I got up and went and looked at the beach during school time at around 10 am and found the beach full of children involved in activities, carrying fish, and I looked to the left, and there were classrooms and teachers without children,” Tagoe said.

Tagoe then made it his mission to reach out to the working children, like Salifu and began meeting with them and chatting about their lives, hopes and dreams.

“The parents also said that we didn’t know the unions work with child labour. So, let’s see what we can do to start a child labour free zone. There has been an enormous reduction in child labour, and more kids are now going to school,” he said.

“Since 2000 to date, the union has helped more than 4500 children in the whole of the agricultural sector, from rice, cocoa and palm oil to lake fishing,” Tagoe said.

A report by NORC at the University of Chicago has claimed that there are almost 1,6 million children involved in child labour in the cocoa industry alone in Ghana and the Ivory Coast.

NORC conducted surveys with children aged between 15 and 17 between 2008 and 2019, showing cocoa production rose by 62%.

Salifu said Tagoe’s team – she fondly refers to him as “daddy’ – assisted her in remaining in school to follow her dream.

“I thought my prayers had been answered. They came to take responsibility for my school (work), purchasing my textbooks, and I was able to write basic education exams,” Salifu said.

She went to school in the mornings and continued working afternoons to support her family.

Salifu completed her Basic Education Certificate and then worked for six months buying fish and selling it in nearby towns to raise money for Senior High School.

“Again, GAWU supported me by paying for some of my fees. I finished senior high at the age of 19 in 2016. I’ve always dreamed of being the greatest teacher in the world and owning my own institution, and working with children,” Salifu said.

Her dream was partially realised when she got a job working at a local school before moving to Accra, where she studied at a Montessori teacher’s training institution. She obtained her National Diploma in Montessori Training and took up a position at Tender Sprout International School in Accra.

“Where I am working, the children come from good homes and are even dropped off at school. But I want to go back to my community and help my brothers and sisters in the village and nearby communities and islands to help liberate them from child labour,” Salifu said.

“I still want to build on my dream to help the orphans and get the children back home. My mom is very aged now too, so I need to support my other siblings and my mother at home. There is no money at home, so they look up to me. I need to go back to university to get a degree in early childhood education.”

“God has saved me now because some mates my age ended up dropping out, and some had teenage pregnancies and STDs. I am very, very lucky,” Salifu said.

Salifu hopes telling her story will be a voice to help those still trapped in child labour escape.

“I think our voices should be heard here so we can go back and launch a project with our brothers and sisters so we can help them. That is my motive for being here. The dream must be achieved,” Salifu said.

This is one of a series of stories IPS published about the 5th Global Conference on the Elimination of Child Labour in Durban, South Africa.

TagsContent Marketing English Financial Content iCN Internal Distribution Menafn Reportedtimes
Global Tape Storage Market To Be Driven By The Increasing Prevalence Of Cyber-Attacks In The Forecast Period Of 2022-2027
Soy Chemicals Market to Surpass Valuation of US$ 50 Billion by 2032; Soy Oils Segment Accounts For A Major Market Share of 31.2%: Fact.MR Study