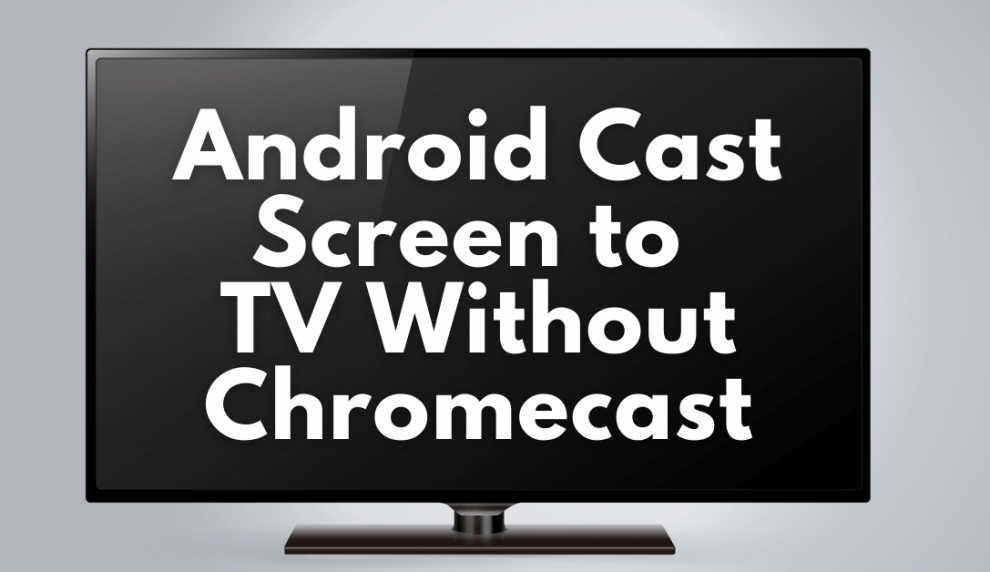 Sharing the contents of your mobile phone’s screen to the big screen of your TV poses a lot of challenges, but once done, the result is very much exhilarating. Consider this: for many people, watching YouTube on the big screen can only be done by casting their phone screen onto the TV, and of course, this would require a whole host of things.

But this is the era of connectivity, and Android cast screen to TV without Chromecast is a possibility. Its just that it requires many other things to be in place and functional for it to work in a conducive manner. Chromecast is one of the most popular devices used for said purpose; i.e., casting your screen, be it PC or smartphone to an external display, like a TV.

Also Read: How to cast to TV without Chromecast

As such, you can expect Google to have sold quite a few of them, and indeed they have: over 150 million devices have been sold to date. So, can you cast Android screen to TV without Chromecast? Well, yes you can, but then, as mentioned beforehand, you’re going to need a lot of other extras or features to help compensate the absence of a dedicated device. So, in this passage you will hear and read about a lot of features commonly present on Android smartphones that you can use to cast screen to TV without Chromecast.

Android Cast screen to TV Without Chromecast: How to?

Android and Chromecast usually go hand-in-hand, considering they have the same manufacturer (Google), and if you can, you should really go for a Chromecast device, as it will not only make the connection a whole lot faster and easier, but also a lot of other problems associated with trying to cast screen to TV will not present themselves. However, if we are to go down this road, let’s just jump in.

If you have a Smart TV at your home (which is usually Android-enabled), well then, you’re in luck, because half of your worries are gone. Its with a regular flatscreen that things can get a bit twisted. Anyways, first, what you need to do is connect both the phone and the TV to the same network, be it Wi-Fi or hotspot. Once that has been done, start by playing any content you want on the smartphone and in the share settings, select the Smart TV you want to share the screen with. This will allow the TV to display your smartphone’s screen, and any content you play on it will be played on the TV. This method is the easiest of the whole lot and requires very less connections, and zero wiring.

HDMI stands for ‘High-Definition Media Input’. It is basically the modern iteration of the yellow and red AV in and AV out cables we saw in the olden days. Its now a singular port that does all; receives and transmits audio and video both from and to the receiving device. The second part is the USB-C port, which depends on two things: availability and whether or not your phone supports it. Since we’re talking about Androids, we’re likely to talk about Samsungs and HTCs and Motorolas.

In this case, a good majority of all Android phones released after 2017 support the USB-C, so this adapter can be used with them if you have a smartphone that’s fairly recent. So, once you have the adapter, connect the USB-C side to your phone and the HDMI side to your TV. The phone will ask for permission to send audio-video to the TV, and voila! Now you have essentially cast your screen to your TV without Chromecast. Although it will be a bit of a problem, considering that these adapters aren’t usually very much in length and your phone will be resting in an awkward position under the TV, but hey. Still beats watching Netflix on your phone.

While with Smart TVs, you can use other functions, many prefer to have it mirror to the larger display because well, why have one screen when you can have two screens? As always more is better, so let’s go for the option that lets people who want to watch it on the TV live out their wish, and for the introverts of the group, a phone will suffice. Anyways, lets start with how you can get to mirror your screen to your TV. Start by selecting ‘Mirror Screen’ or ‘Screen Mirroring’ from the drop-down menu of your smartphone.

This will bring up a list of devices around the vicinity that you can connect and mirror your screen to. For this to actually perform, the smartphone and the Smart TV both need to be connected to the same network, as it will make the connection much more swift, easy and with minimal lag. Once your phone detects the Smart TV, the phone will automatically start mirroring the content on its screen to the TV. An important clarification: many consider the screen sharing effect to be in tandem with the phone, but the fact is that the content is played simultaneously on both the displays.

Miracast is a built-in feature in many smartphones including Androids, and it is a particularly useful feature for when you want to cast your Android screen to TV without Chromecast. However, for Miracast to actually work, both the devices need to have Miracast enabled, which is something not all TVs can boast, while many phones do. So, to start off, turn on Miracast function on your phone and on the TV.

Your phone will automatically detect any Miracast-using devices in a radius and you can tap on your device of choice to be used for sharing your Android phone’s screen. The Miracast will automatically establish a connection, and within a minute, your TV will be ready to display any content that’s being played on the smartphone. This is pretty neat.

There are many devices other than a Chromecast that you can use to cast Android screen to TV without Chromecast. Of course, since we’re talking Android here, Apple TV is out of the question, but there are still Amazon Fire and Roku TV set-top boxes, which you can use to mimic the effect of any casting device or streaming device. Aside from these two,

there are also a whole host of other devices, manufactured by Chinese companies, that can connect to your TV and then be used to cast your phone’s screen to the TV. However, one thing to keep in mind is that the TV needs to be a Smart TV for a majority of these features to be used. With a regular flatscreen, the most you can do is with the HDMI adapter, and that isn’t all that good.