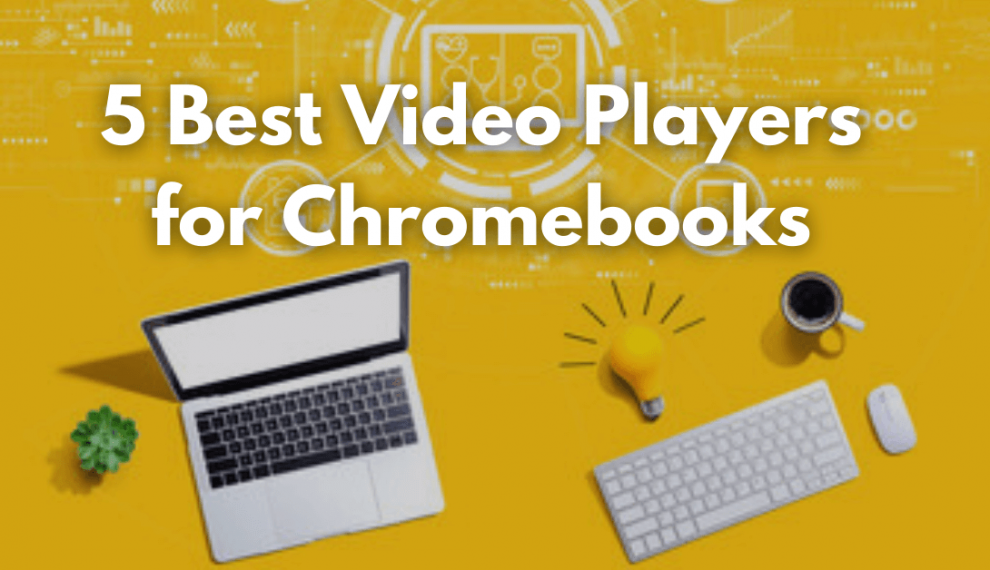 However, Chromebooks are a completely different story. Someone who is new to using Chromebook devices can become confused about which video players are in synchronization with their Chromebook and which ones are not. One of the biggest downsides of using the default built-in Chromebook video player is that users miss a major chunk of entertainment because the user interface is annoying and boring as well. To remove this ambiguity and mass confusion, here is a detailed list of 5 best video players for Chromebooks.

Movies and videos are some of the best entertainment tools out there that help in passing time quickly. If you watch every movie closely, you will quickly learn that they not only prevent you from getting bored, but also help you in learning many new things. When it comes to our regular laptops, computers, and smartphones, playing a video is quite straightforward.

When you make a Google search for video players for Chromebooks, you will end up with hundreds of options. Due to this reason, choosing the perfect video player with the right user interface and functionality becomes a little challenging. Save your time by going through our list of the best video players and try it out for yourself.

Even in regular PCs, if a video or movie fails to run on your default media player, VLC Media Player always comes into the rescue. Chromebooks also allow the VLC Media Player to run movies with various extensions on its system. MKV, MP4, AVI, MOV, M2TS, Wv, and AAC are some of the formats that are playable on the player. With so many file types available to play, the list of movies that you can play on it becomes endless.

We all know that VLC media player is one of the most beloved and popular app throughout the world. The interface is amazing and easy to use. One of the best things about VLC Media Player is that it serves as both a video and audio player. For example, if you want to play some tunes on your Chromebook, you can open them in the VLC Media Player and hear them for as long as you want.

Are you a fan of subtitles? If yes, then VLC Media Player is the perfect video player for your Chromebook. It supports the audio, video, and even subtitle tracks in a perfectly synchronized manner. If you have the right subtitle file available, then there are little to no glitches in the video. Other options such as adjustment to the ratio aspect of the movie are also available. This means you can choose to watch the desired videos in 16:9, 1:1, 4:3, and many other formats.

VLC Media Player offers many shortcuts to its users. They are straightforward, uncomplicated, and do not involve a bunch of different keys. Through them, you can control the brightness, volume, subtitle track, and many other functionalities as well.

Due to its worldwide popularity, some of the latest Chromebooks have an in-built VLC Media Player. In case, it is not present in the system already, you can easily download it from different platforms.

Are you looking for the perfect Video Player for your Chromebook that is readily available at the Google Play Store? Then, MX Player is the best option for you. MX Player is one of the most powerful video players out there. Developed by J2 Interactive, it is in the list of top 10 most downloaded video players. All the basic features of MX Player are similar to the ones offered by most of its competitors.

The user interface of MX Player is friendly and easy to use. Any layman in the field of technology can easily learn to run this video player on their Chromebooks. Features such as playing subtitles and in-video effects are also available. Subtitles are quite synchronized and the several formats of subtitles easily run on MX players. If you want to zoom into the video with MX Player, there is that option as well.

This application is available for free on Chromebooks. But the only downside is that while using this app for free, you will have to watch multiple ads at a time. This can be inconvenient and straight up annoying most of the time. In order to skip the ads and watch the videos and movies in peace, it is best to purchase the app from Play Store for $5.99 (which is next to nothing as compared to the versatile features that it provides).

Kodi is one of the applications that was not supported on Chromebooks. But as of the recent updates made by the Chromebook developers, you can easily download the Kodi video player on your Chromebook. Unfortunately, the owners of older versions of Chromebook do not have the option of utilizing the services of Kodi video player. Nonetheless, for everyone else, it is available to download on the Google Play Store.

Kodi is an open source home-theater software. Once you download it into the system, all playbacks will run through it. It not only allows users to run and watch videos but, like VLC Media Player, it also allows the users to listen to the various mp3 songs without any videos. There are many different features that can be added to the application as per personal dislikes and likes.

Kodi allows users to synchronize t streams of YouTube, Netflix, and many other channels in their Chromebooks. This means that they can watch all of the Internet content through Kodi Media Player. The UI may be a bit difficult to handle but there are multiple options that can be embedded in the application to ensure that the video player for Chromebook becomes user-friendly and easy to comprehend.

Many Chromebook users prefer Kodi as the best video player because it is free of cost, contains hundreds of build options, and incorporates different streaming apps within the main video player.

Also Read: How to Turn Your PC Into a Chromecast Receiver?

Amongst all the top-rated video players for Chromebook, CnX player is considered as one of the most efficient and effective video players. This is because it is readily available on Google Play Store to download. If you want to download it directly, then the app is also easily downloadable from the website of CnX Player.

One of the reasons why Chromebook users like to use this video player is because it does not require the video to be converted before running it. CnX Player accepts, runs, and plays video files of multiple formats. It is optimized for hardware usage; this means that it consumes very little battery of your Chromebook while it is running. You can easily run this application for hours without having to worry about the battery running out.

The user interface might seem a little complicated in the beginning but eventually people get used to it after running the player a few times. If you are someone who wants to enjoy movies in a high quality and HD format, then it is best to download CnX Player on your Chromebook as it is one of the best video players for it.

Archos Video Player is also a part of the list containing best video players for Chromebooks. It is downloadable on your Chromebooks without any hassle through the Google Play Store. Previously, this app was only available for a price but now with the advent of earning money through ads, Archos Video Player has been launched in the free version as well.

This application allows you to adjust the screen brightness and volume on a few simple commands while watching the movie. You can optimize the performance of the Archos Video Player to improve the overall battery performance of your Chromebook. The user interface is easy to navigate and simple to understand.

It has the ability to play different video files with multiple extensions. Moreover, users of Chromebooks can enjoy videos from shared servers on Archos Video Player. If you want to put bookmarks, this feature can also be utilized as it is available in the software. Considering all these benefits, Archos Video Player is a very good option for Chromebooks. If you want to run this application without any ads, you just have to pay $5 for the application.

The above mentioned list discusses the 5 best video players for a Chromebook. You can download each one by one and stick with the one that you find the most easy to work with. Ultimate purpose of these video players is to make uncomplicated your usage of the Chromebook while providing you with maximum customized entertainment experience.

Here are the answers to some of the most frequently asked questions about video players on a Chromebook:

Q1. How do I play videos on my Chromebook?

Q2. Do Chromebooks have a video player?

Yes, there is a default built in video player present in all Chromebook devices. There are multiple but limited features available in this video player as compared to VLC Media Player.

Q3. What is the default video player for Chromebook?

Can you use Chromecast on multiple TVs?
How to Delete Downloads on Chromebooks
Comment